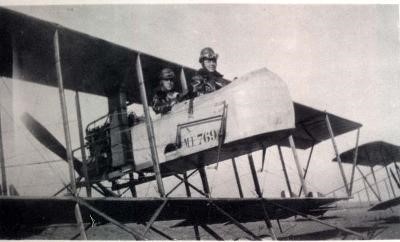 Edward David Baker, an American aviator in the First World War, a 2nd cousin of my late father, John Sharp Thompson (1913-1972), killed in aerial combat near Verdun on the 24th October 1918, five days after his 22nd birthday. 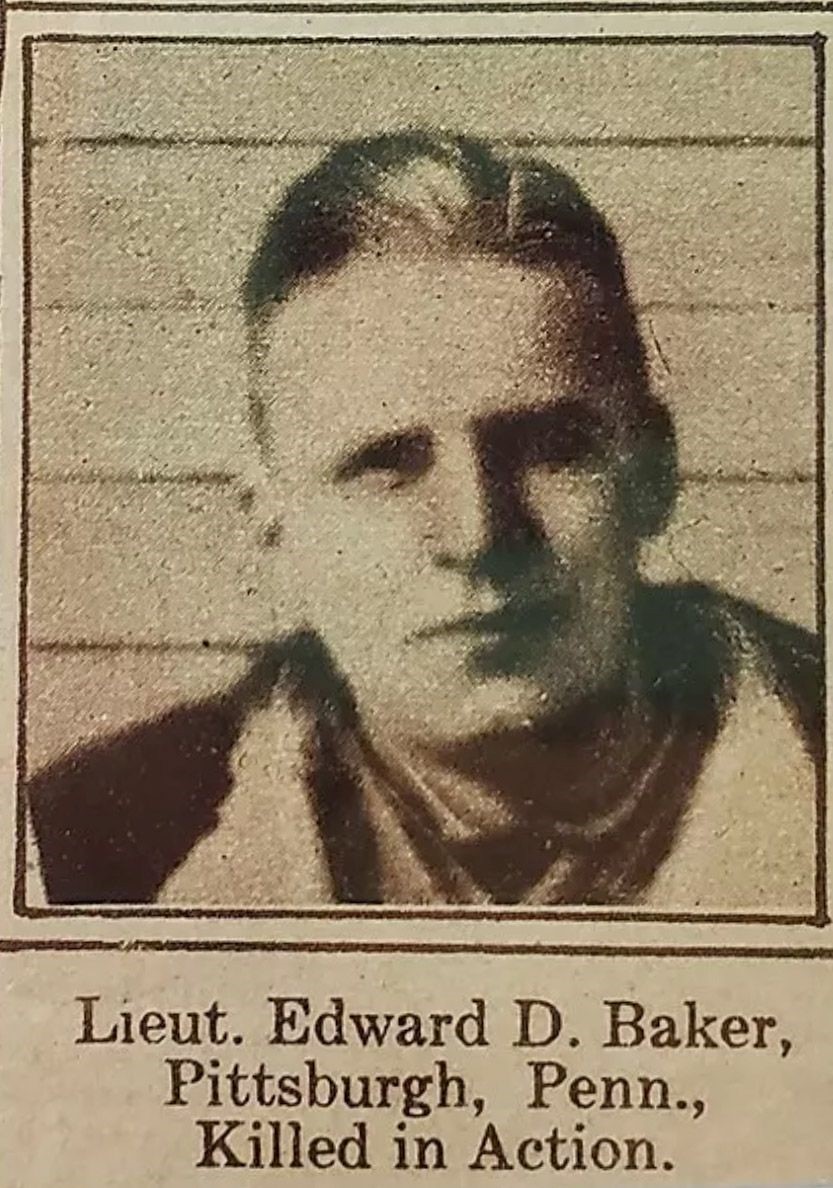 My initial research into the sad and untimely death of Edward was in 2008. The previous year I visited Pittsburgh searching for information about my paternal Grandmother, Hannah Sharp (1875-1956), and the family she lived with from the age of fifteen for over seven years. At the Carnegie Library, I scoured records in anticipation that there would be information relating to a 'Sharp' family living in Pittsburgh in the late 19th century, to no avail.

It was on my return home that I made the connection between Hannah and the maternal side of her family, that of the 'Little's'. Her uncle, Edward Little had left his home in Cumberland, England in 1869 to settle in Washington, Pennsylvania. So, this was the family with which Hannah lived during her time in the USA. My research then moved onto Hannah's Pennsylvania cousins in Washington and Pittsburgh; she certainly maintained her friendship with some of them until her death in 1956. With the benefit of hindsight, if I had looked further into Hannah's bloodline, I would have investigated the Little family whilst at the Carnegie Library and travelled to Washington. Thirteen years on, I still haven't managed to do so.

However, I have accumulated a substantial amount of information about Edward Little and his descendants. To that end, I was drawn to find out more about Edward David Little because of his participation in World War I as an aviator and the fact that Hannah would have been in Pittsburgh at the time that he was born in nearby Washington. She may well have cared for him and attended his baptism before she returned to England, the year after his birth in 1897 (post of the Little family due Spring 2021).

In 2008, I did manage to write a mini biography of Edward but as there were several inconsistencies in the information I received via email including his squadrons, exact cause of his death and his final burial place, the writing has remained on the back-burner. It was last month, when I started to assemble my research related to deaths in the two World Wars, relevant to Remembrance Day that I located my writing about my Little ancestry and Edward David Baker. 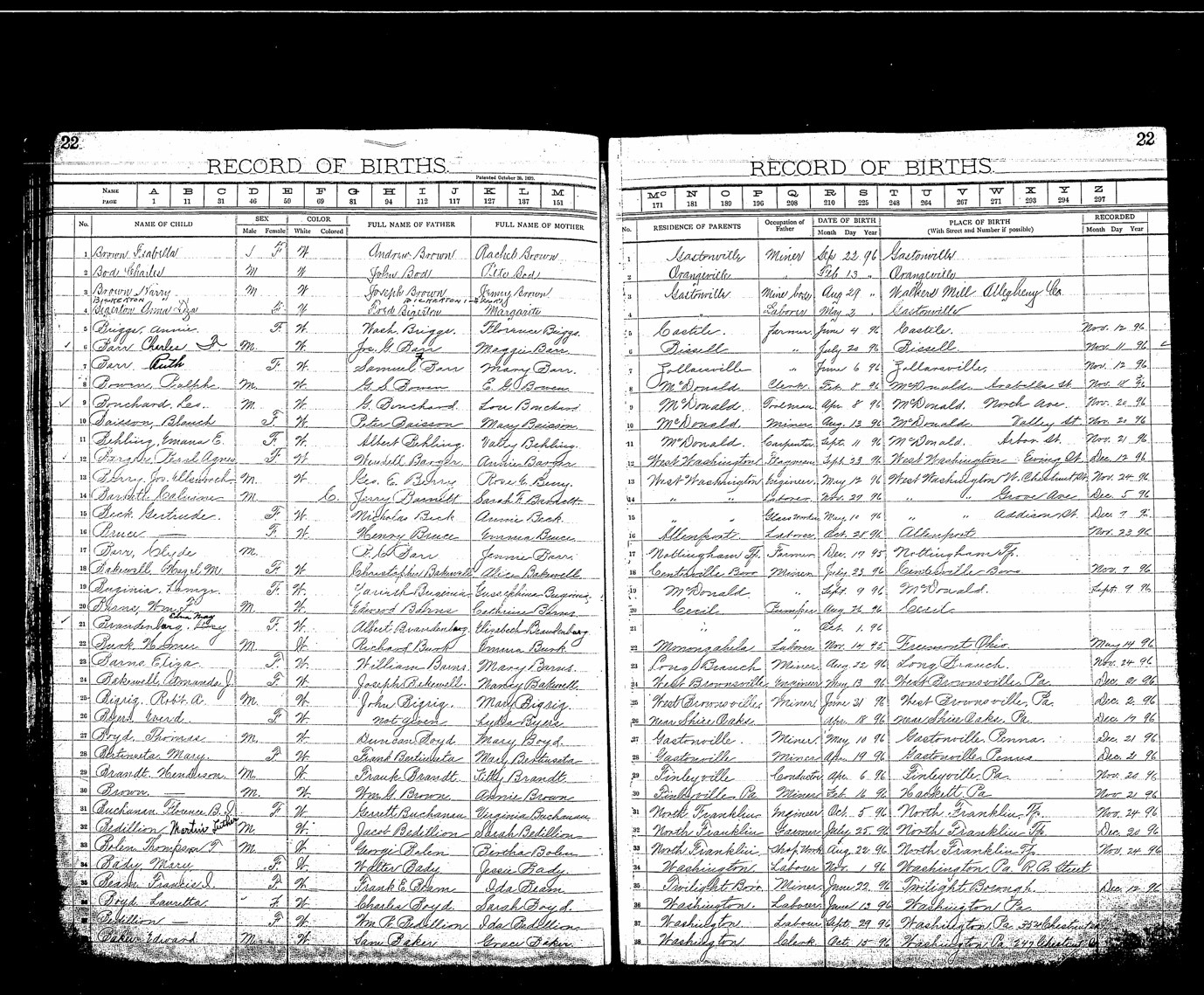 Edward's mother Grace Little was born at Cleator Moor in Cumberland, England & emigrated with her parents the year after her birth in 1869, to Washington Pennsylvania. Her parents were Eleanor Wales (1836-1891) and Edward Little (1837-1885). Edward's father was Dr Simon Strauss Baker, a prominent academic in both Washington and Pittsburgh (post due Spring 2021).

According to the 1900 Census, Edward, aged 3 years was living with his parents, at 73/74 Hodgson Street, Chartiers, Pennsylvania. His father Simon was a Principal at a Public School. Also living at the house was his maternal uncle, Edward Little (1878-1904), a hardware salesman together with a servant.

The 1910 Census sees the family living in Brown Street, Ward 8 in Pittsburgh with Edward aged 13yrs; Simon's employment is listed as a Public-School Teacher. Edward therefore spent his formative years in Pittsburgh before attending Culver Military Academy at Culver, Lake Maxinkurackee, Indiana. In the spring of 1917, when the USA entered WW1, then aged 20 years, Edward enlisted in the aviation section of the army.

Edward started his training at Kelly Field in Texas in August 1917, followed by a preparatory course at the Aviation Concentration and Supply Depot at Mineola, New York in October 1917. He was then assigned to the first group of American aviators sent to Europe, firstly to Paris followed by transfer to Italy for operation in the King's Flying Field at Foggia, eighty miles east of Naples.

I am very grateful to Mike, (NJ Aviators) for the information he sent me in 2008, regarding Edward's training in Italy:

He was assigned to the 8th Aviation Instruction Center at Foggia, Italy for flight instruction. This was a training center for American's originally destined for service with the Italians flying Caproni bombers. Some of the students were later transferred for French training and Baker was certainly among them. 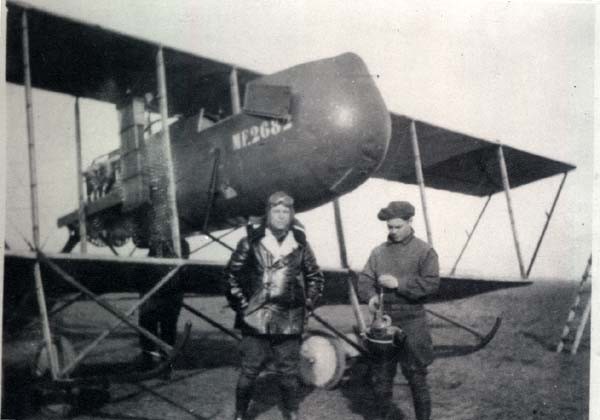 I can tell you he was not in the first class of students at Foggia who arrived in September 1917. It's probable though that he arrived fairly early - and departed early. It was typical of students who arrived at Foggia and who later transferred to French training that they took a long time to get to the front with active squadrons. One early arrival who started at Foggia in October 1917 and later transferred did not arrive at the front until 5 November after passing through French training so for Baker to arrive in September, I expect he arrived fairly early - possibly even in late 1917 - and left very early - probably the later winter Jan or Feb 1918.

In fact, Edward was in Foggia with the Italian aviation corps for almost a year before his transfer to the Western Front and assignment as First Lieutenant in the 96th Aero Squadron in June 1918, flying a Breguet 14 B.2 bomber (1). 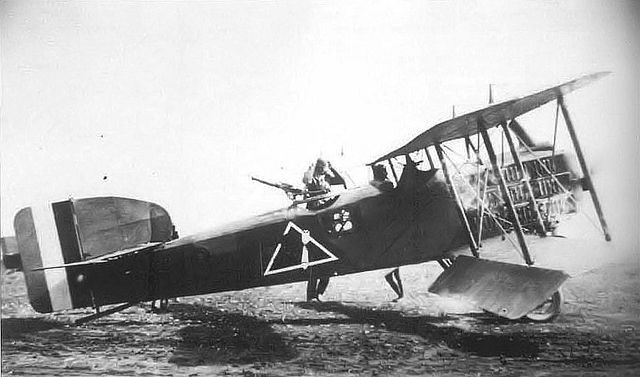 He was deployed to the Toul Sector (22nd June-11th September) (2) and then saw active service in two campaigns starting with the St Mihiel Offensive (12th -16th September) (3) and the Meuse-Argonne Offensive (26th September-11th November) (4).

It was only eleven days before the end of the Meuse-Argonne Offensive Campaign and three weeks before the armistice, on the 24th October that Edward was killed in action, flying a plane preparing for bombing over the Verdun area in Northern France. 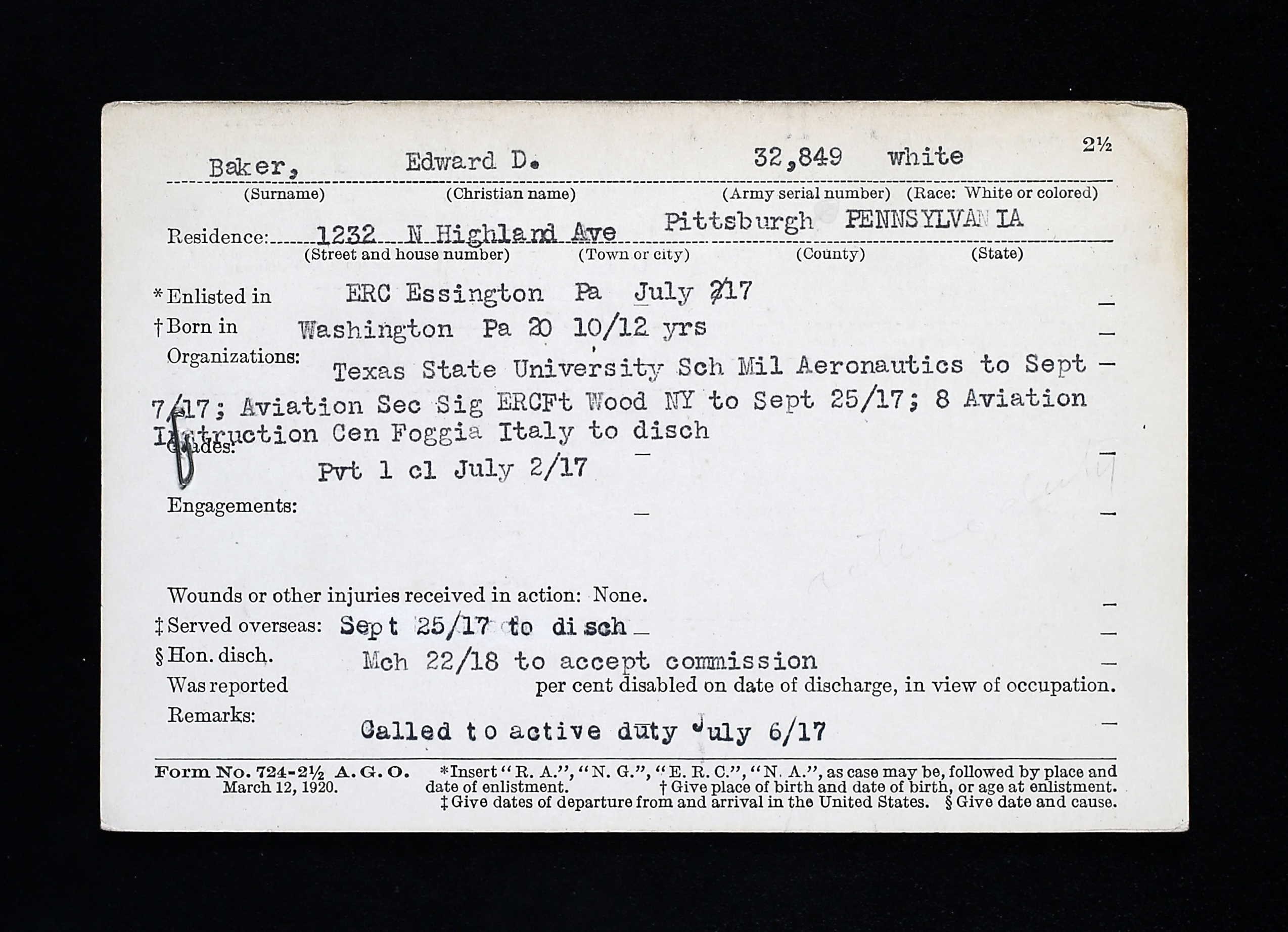 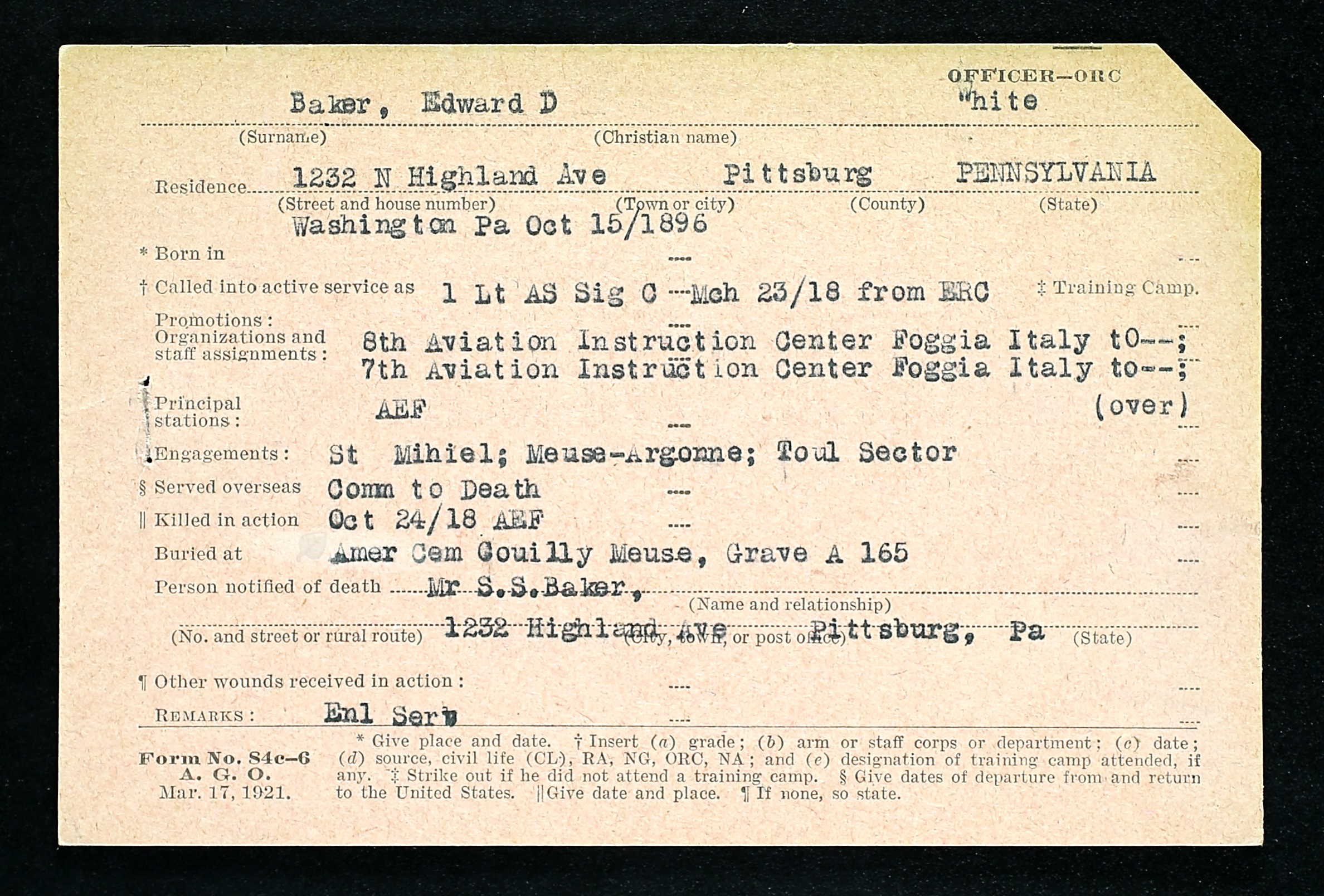 Lt. Edward David Baker was assigned as a pilot to active duty on the 12th September 1918, dying on the 24th October 1918. He was one of only six aviators of the 96th Aero Squadron 'Killed in Action' on the Western Front and his Breguet 14 B.2 bomber, was one of the fourteen lost in action. 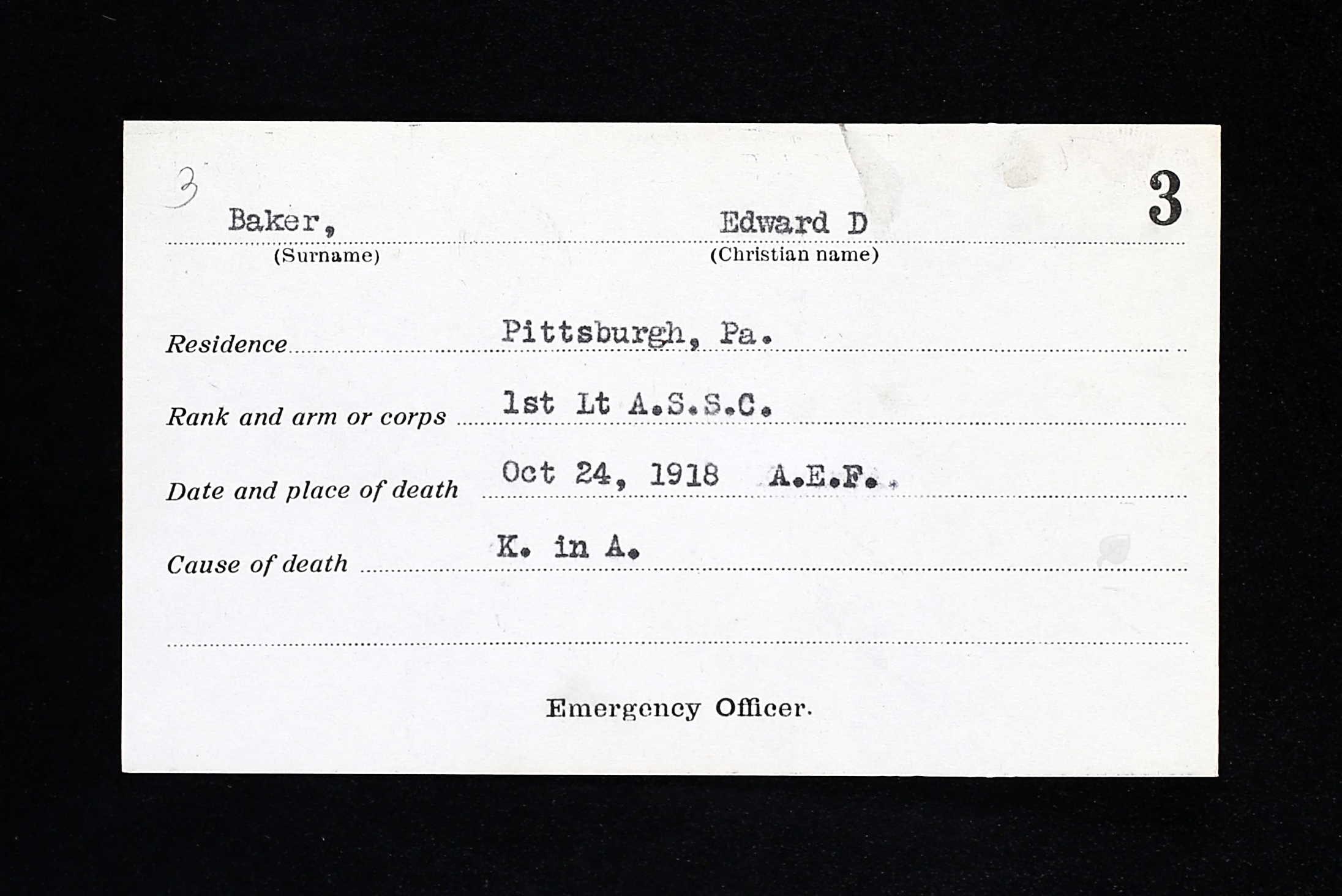 Soldiers of The Great War: Pennsylvania 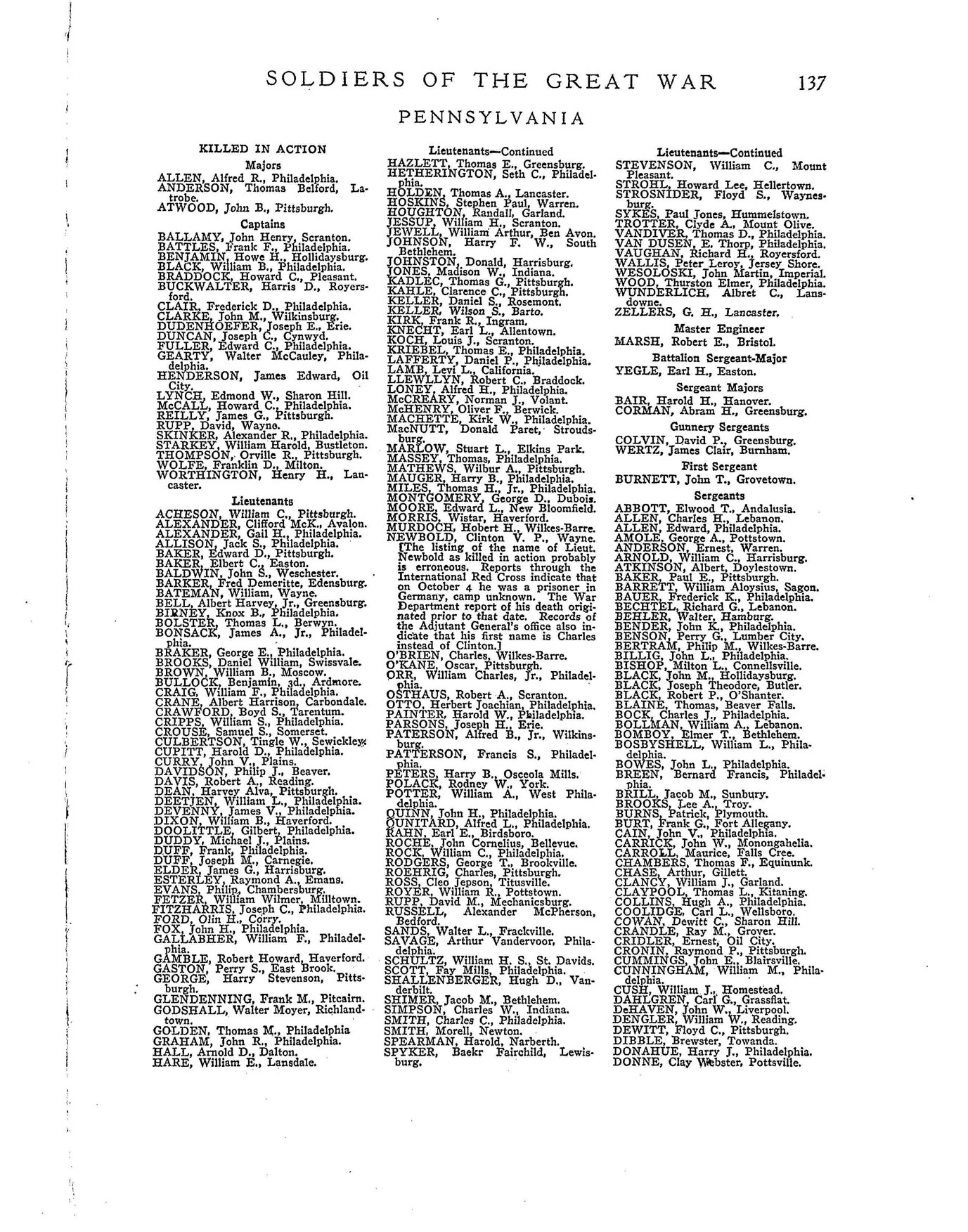 Lieutenant Baker's body was interred at Souille Meusse, Grave A 165 then exhumed and re-interred in the burial plot of the Baker family in Washington, Cemetery, Pennsylvania.

I am very grateful to Paul R Shiring, Superintendent of The Washington Cemetery, Inc. who forwarded to me in September 2008, photographs of the Little, Whiting and Baker graves including the two of Edward's grave. 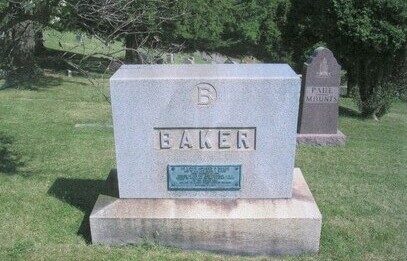 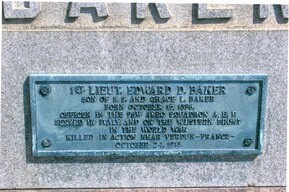 The only other record I have been able to find so far relating to his death is in this Pennsylvania, U.S., World War 1 Veterans Service and Compensation File, 1917-1919 for Edward D Baker (p. 377). 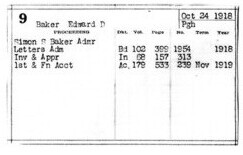 Edward's parents, Grace (Little) and Simon Strauss Baker sailed from New York disembarking at Southampton on the 6th July 1920. According to the manifest for the Mauretania, they travelled first class on this luxurious White Star liner (built at Wallsend on the River Tyne). Their return journey, again onboard the Mauretania was from Cherbourg, setting sail on the 21st August 1920. It seems feasible that whilst in France, they visited the grave of their only child at Souille Meusse and made arrangements for the repatriation of his body to Washington, Pennsylvania.

As an ambitious aviator, Edward, if he had survived the War, may well have had a distinguished career, advancing to Major-General with burial appropriate to his rank in Arlington Cemetery (we visited whilst in Washington, DC., on a family holiday in 1997).

In February 2019, during a visit to Dundee, we attended the excellent exhibition at the newly-opened V&A 'Ocean Liners: Speed and Style (15 September 2018-24 February 2019)'. Part of the theme was the opulence of first-class passage. Grace and Simon Baker, must indeed have enjoyed the luxury whilst at the same time, grieving for their son.

The death of Edward was devastating for his parents and had a particularly profound effect on his father. In 2021, I will be adding more to my site about Dr Simon Strauss Baker as well as my American Little family.

In 2008, there was some confusion as to which Aero Squadron Edward D Baker was deployed; either the 96th Aero Squadron or the 91st Aero Service Squadron. It is unequivocal that it was the former with the evidence provided in his service record together with research by Dr Nigel Thomas, Military Historian (Appendix 1).

The first 46 American cadets arrive at Foggia, Italy, for flight training. Another 250 soon join them, and almost 500 American aviators will receive training in Italy - primarily at Foggia - before the war ends in November 1918. In accordance with an agreement with Italy, the United States will receive bomber aircraft from Italy, and Army Air Service cadets will receive flight training from the Royal Italian Army's Military Aviation Corps in exchange for raw materials from the United States.

The Tour sector is chosen as the most logical, and quiet, place for the American Air Service to begin combat operations.

The first major and distinctly American offensive is the reduction of the salient during the Battle of Saint-Mihiel. General Pershing commands the US First Army composed of seven divisions and more than 500,000 men. 627 French and 611 American fighters (30 squadrons) are brought together for the Battle. The American units are under the command of Brig Gen Billy Mitchell and is the largest force of aircraft assembled for a single operation.

US forces of 1,200,000 troops launch the Meuse-Argonne offensive with air support from the Army Air Service. The battle lasts until the Armistice on November 11. The observations squadrons have a difficult time over the dense and hilly Argonne terrain. The fighter squadrons are grouped effectively to deal with the massed Geschwader.
A Chronology of World War I Aviation Events: WWI Aviation History Timeline - Updated 2/21/2017-compiled & curated by Brigadier General R. G. Head, USAF (Ret.).

The 96th Aero Squadron was formed August 1917 at Kelly Field, Texas. On 16th November 1917 it arrived at the 7th Aviation Instruction Centre, Aulnat Aerodrome in Central France, where it began training as one of the first Day Bombardment (Bomber) squadrons, performing strategic reconnaissance missions behind German lines and tactical bombing attacks on German forces in support of Allied offensive operations, flying French Breguet 14B-2 bombers, each aeroplane having a Pilot and an Observer/Air Gunner/Bombardier. 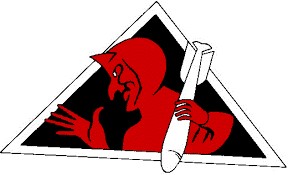 The most important action was 18 October 1918. 14 Breguets of the Squadron dropped 1,600 kilos of bombs on Sivry. The Germans retaliated by sending 15 Fokker and Pfalz fighters and one Fokker attacked a Breguet but was unable to shoot it down. I am assuming that 1st Lieutenant Baker was an aviator on one of the 14 Breguets. Aircrews were not named, just the flight leaders and pilots either killed in combat or forced to land.

The last action that 1st Lieutenant Baker could have been involved as a bomber pilot on a Breguet 14B-2, was on the 23rd October when eleven aircraft set out on a bombing mission to Bois de la Folie; seven aircraft reached their target with two being forced to land having brought down two enemy planes (Gorrell, p.93/136). There is greater detail about rounds of ammunition fired and the number/weight of bombs dispatched than providing identities of the pilots and observers.

Although, 1st Lieutenant Edward D Baker's service record states that he was killed in combat, it is more likely that he was killed as a result of an accident preparing for a future raid as stated in Gorrell, p.3, (Casualties in the 96th Aero Squadron). A missing statistic is the number of his missions from his assignment to duty on the 12th September 1918 to his death.

On 4 November 1918, five Breguets bombed Montmédy and were attacked by 15 Pfalz fighters which was the 96th's last action of the War as the Armistice took effect one week later on 11 November 1918. 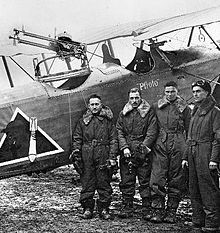 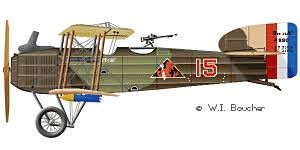