It was on the 16th February 1941 at 00.25 that the Heinkel He 111 P-4 heading for the North sea after a mission with 128 other bombers where they had successfully targetted locations throughout England, that the plane crashed in South shields. It was possibly hit by gunfire before, becoming entangled in a barrage balloon cable. Part of one of the wings was broken off and landed on the seashore. The plane then lost height and crashed in Beach Road into a crater which had been there since the previous year.

One member of the crew, Flight Sergeant Wilhelm Beetz, the pilot, bailed out but his parachute caught on the overhead trolley wires near the Sea Hotel causing him to hang downwards until he was cut free and taken to the Ingham Infirmary. The remainder of the crew of five, perished with their plane on impact with the ground.

The following includes my contribution to an article in the Shields Gazette of February 29th 2016.

First and foremost, I would like to thank everyone who provided information regarding the downing of a German bomber in South Shields. I am particularly grateful to the families of the brave men who lost their lives trying to save the crew of the enemy plane that crashed near the Bents Park, for their assistance in shedding light on the dramatic and ultimately tragic events of that night.

Today two more readers give their personal and touching accounts of the incident which left nine men dead. Heather V Thomas, who is a volunteer at South Shields library, says:

''My late parents, Vera and John Sharp Thompson, often related to me the incident of the night of February 16, 1941, when the German bomber crashed in Bents Park. I have since discovered that the aircraft was a Heinkel 111 P-4 medium bomber (fuselage marking 5J+GP) of 6thSquadron, 4th Bomber Group (6/KG4), based in the Netherlands, and piloted by Oberfeldwebel (Flight Sergeant) Wilhelm Beetz.

Whilst bailing out Beetz's parachute was caught in trolleybus wires near the Sea Hotel. Although he was electrocuted, Beetz did not die immediately, but remained for some time entangled in the wires, only to die later in the Ingham Infirmary. 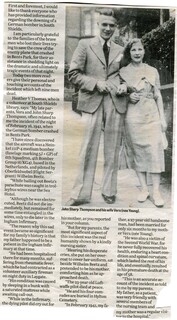 The reason why this sad event became so significant for my family's history is that my father happened to be a patient at the Ingham Infirmary at that time. He had been hospitalised there for many months, suffering from rheumatic fever, which he had contracted as a volunteer auxiliary fireman on night duty at Laygate. His condition was caused by sleeping in a bunk with a saturated mattress while awaiting call-out.

While in the Infirmary, the dying pilot did cry out for his mother, as you reported in your column. But for my parents the most significant aspect of the incident was the real humanity shown in by a kindly nursing sister. Hearing his desperate cries, she put on her overcoat to cover her uniform, sat beside Wilhelm Beetz and pretended to be his mother, comforting him as he approached death. The 23-year-old Luftwaffe pilot died at peace. He and his four comrades are buried at Hylton Cemetery.

In February 1941, my father, a 27-year-old handsome man had been married for only six months to my mother Vera (nee Young). He was also a victim of the Second World War, for he never fully recovered his health, enduring a heart condition and spinal curvature, which last the rest of his life, and eventually resulted in his premature death at the age of 58.

This is an accurate account of the incident as told to me by my parents. My father as a patient, was very friendly with several members of the nursing team and my mother was a regular visitor to the hospital''.

It was the Auxiliary Fire Service that rescued the airman but not without incident as in his rescue of the airman, John Wharton, aged 36 was wounded, dying later also in the Ingham Infirmary. In attempting to rescue the four airmen in Beach Road, a mine that the enemy aircraft had been carrying exploded, blowing the aircraft and the remains of the four crew still inside to pieces.

Sadly, as a result of the explosion, PC Leslie Lamb, aged 23, Albert G Purvis, aged 23 and George Walter Renwick, aged 33 died of the injuries they sustained in the Ingham Infirmary where seventeen more injured members of the Police Force, Fire Brigade and Auxiliary Fire Service were also admitted.

So powerful was the explosion that it could be seen and heard in Newcastle, some thirteen miles away with substantial damage to property in the surrounding area. 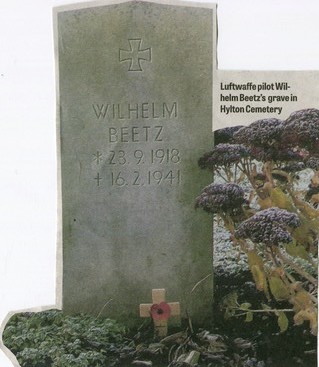