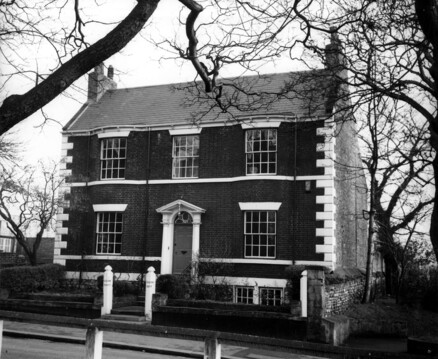 James Young, mariner and ship owner was leased Meadowcroft in 1819 when the executors of the estate of Jane Wright transferred the lease to him following her death on the 15 Aug 1818 aged 96. She inherited the house from her husband Luke Wright when he died on the 15 December 1805 aged 75 years. Both were buried in St Hilda's Churchyard and according to the records, Luke was also a ship owner. Luke married Jane Liddell at St Hilda's Church in 1768 when he was aged 38 and she was 46.

James Young was part of a South Shields shipping dynasty; the brother of Cuthbert Young (1765-1835), manager then owner of the West Docks, one of the most significant South Shields ship owners and ship builders in the early 19th century whilst Cuthbert's son James Young (1808-1886) who lived in Ogle Terrrace amassed an even larger shipping portfolio. On his death, his wealth contributed to the development of Cleadon Park as his daughter Margaret Young (1834-1904) married Charles William Anderson (1830-1906). Ownership of the West Docks passed to the Wright family. Mary Young (1777-1860), sister of James and Cuthbert Young married William Wright at St Hilda's Church in 1799. It was their son Leonard Wright (1800-1864) who developed Wright's Biscuit factory on the land, which had belonged to his paternal grandparents Hannah Burdon and Leonard Wright.

Elizabeth Roseby, the mother of James Young died in 1841 at the West Docks living to the incredible age of 104 yrs and 4 months. She was widowed for almost 59 years; her husband George Young dying in 1782 leaving her as a sole parent for seven children ranging in ages from 3 to 17yrs. Three sons including James Young were Master Mariners and ship-owners whilst her eldest son Cuthbert Young, a shipwright managed ship yards renting then purchasing the West Docks in 1818 as well as having an extensive shipping portfolio. The family lived mostly in East and West Holborn, the area to which James Young eventually returned.

James Young (1767-1842) married Selena Mary Hobbs (1768-1810) in Kings Worthy, Hampshire on the 7 May 1800. According to the Hampshire Marriage License allegations of the Bishop of Winchester, 1689-1837, James was born in South Shields and at the time of his marriage he was aged 29 and a Master Mariner. The baptism record for his second child, Sophia Rachael Young born on the 2 June 1804 in South Shields gives James's birthplace as that of Tanfield, with that of his wife Selena as King's Worthy.

The birth/christening information for each of them is as follows:

Based on the information relating to the birth of the four children, the family probably settled in South Shields between Mar 1803 and May 1804.

There are numerous records relating to master mariners and ship-owners with their residency ascribed to South Shields in Dictionary of Tyne Sailing Ships (1830-1930) by Richard E Keys. However, most of them are associated with James Young (1805-1888). There is one record, which can be connected to James Young (1783-1842): -

The executors of the estate of Jane Wright transferred the lease to James Young in 1819 following her death in 1818. There is no obvious connection between Jane Wright & James Young. Luke Wright who died on the 15 December 1805 aged 75 years bequeathed the house to Jane (Liddell) Wright, his wife. Luke married Jane Liddell (1720-at St Hilda's Church on the 12th December 1768.

Amy Flagg assumed that James Young occupied the house from 1829 onwards. However, in the 1841 census record and his burial record, Meadowcroft is not stated as his place of residence. Grew croft, the address given for him in 1841 was in Laygate, an area of the town where it was he resided prior to 1829, according to the extract (3).

Meadowcroft remained in the Toshach family and was leased to Thomas Henry Mason, the husband of Mary Hannah Toshach who was the niece of Dr John Toshach and eventually to Mary herself who died in the house in 1946. Following her death, the property was conveyed to their son, Clifford D Mason who died in 1963. It is suggested that the house had remained with the Young family over several generations. This was, however, not the case as Mary Hannah Toshach was not a descendant of James Young.

I have been unable to determine whether or not Jane Liddell had been married previously as if so, Liddell would not have been her maiden name.

A Jane Liddell was born 1720 in Whickham, daughter of Jane Atkinson (1685-) and George Liddle.(1682-). Thomas Liddell born Blaydon Staithes 1743, her nephew married Jane Wright (1745-) born Heworth, daughter of Dorothy Simpson (1713-) and Henry Wright (1709-) married in Sunderland 1734. Other than Jane Wright, their children included Leonard Wright (1736-1809) who married Hannah Burdon (1740-1818) of Monkton at Heworth in 1761. Both Leonard Wright and Hannah Burdon were buried at St Hilda's. William Wright (17), their son married Mary Young daughter of Elizabeth and George Young, sister of James Young. This leads to the prosperous and significant Wright family of South Shields. At the time of her death, Hannah lived in Johnstone Street providing a link to Wright's Biscuit Factory.

POSSIBLE LINKS BETWEEN THE WRIGHT FAMILIES OF SUNDERLAND

I have investigated a possible connection between Matthew Wright, father of Luke Wright who resided in Sunderland at about the same time as Henry Wright (1709-) finding no connection to date.

Following his death, Sophia married Bostock Toller Whinney (1796-1860) in 1850. He was a ship-owner and it was his third marriage. According to the 1851 census, they lived at 27 East King Street, South Shields. Bostock died in 1860 and his interred in Grave 106 in Westoe Cemetery.

At the time of the 1861 census, Sophia resided with her sister, Selena and Selena's husband John Toshach at 7 Dean Street, South Shields; in 1881 she lived at 32 Winchester Street, with her widowed sister. Sophia died on the 10 August 1883 and was interred in the same grave as Bostock Whinney. It is likely that she was childless.

Selena married John Toshach at St Hilda's Church on 18 Mar 1826. John was the son of Dr Charles Toshach, a non-conformist minister who also had a connection with Westoe Village having sold land in 1810 to facilitate the building of Chapel House in the village (4).

Selena and John Toshach had eleven children, some of whom, together with their parents are interred in Westoe Cemetery in Grave 88. Selena died on the 29 October 1892 aged 89 years. At the time of her death, and prior to this according to the 1881 and 1891 censuses, her place of residence was registered as 32 Winchester Street. Winchester Street was considered to be a prestigious address in the late 19th century although of a lower status than Westoe Village. The probate record states that her estate was worth Ã‚Â£2,478. (A copy of Selena's probate could provide information about her beneficiaries and the ownership of Meadowcroft).

No further information about James Hobbs Young has been elicited other than that he died at age 25yrs on the 26 January 1834 and according to the family monumental inscription was interred in St Hilda's Churchyard in the same grave as his parents. However, there is no record of his actual burial in the records of burials in the churchyard.

Selena (Hobbs) Young died on the 21st January 1810 aged 43 yrs and was buried in St Hilda's Churchyard, South Shields. The burial record also includes information about her husband, James stating that he was a Master Mariner. On the monumental stone, he is referred to as a 'Ship Owner' (2).
Anna Young died Preston, North Shields aged 77, buried St Hilda's Churchyard 28th October 1848.
James Young 1841 Census this time he was living with his wife Anna (Ann Laverick), his daughter, Sophia and John Toshach, his grandson (the child of Selena Mary Young and John Toshach) is also registered as being at the same address-Grew Cook's Building in the Rekendyke area of South Shields. James stated that he was born in County Durham.

I have looked for descendants of Selena Mary Young and John Toshach as well as their grandchildren (great grandchildren of Selena and James Young). There is not a link to the 20th century in South Shields. Most of their children did not marry. Only two appear to have children surviving into adulthood.

Notes on Meadowcroft 2013
Substantial information about Meadowcroft was accessed relating to the original building, the subsequent fire, the Georgian house, ownership and occupancy. They are as follows: