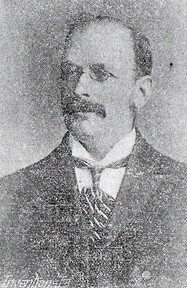 The scene was on top of a tram car going down King Street, South Shields, the personnel two well-known gentlemen.

Said gentleman No. 1: ''Is it correct that there is going to be a contest in the Beacon Ward of the Town Council this November?''

It was the Inspector, and having torn-up my piece of paste-board a minute previous, I thought it well to leave the car.

But the conversation had set me thinking, and I set about learning a few particulars in relation to the retiring representative of the Beacon Ward. The facts I gathered together were INTERESTING.

First and foremost, Mr Pollard is a native of South Shields, having first seen the light of day in the year 1859.

He received a sound education at Mr Smoult's private school, among his companions there being several who now represent the ratepayers of different wards. At school he showed conspicuous ability, and ere he left he was top boy of the form.

On his education being completed, Mr Pollard went to serve his time with Messrs. Edward Moore and Company, glass manufacturers, Holborn. He rapidly rose in the estimation of his employers, until he became manager of the warehouse and packing departments. At the expiration of his apprenticeship, Mr Pollard stayed on some time, but eventually severed his connection with the firm, and commenced business on his own account as a glass and china merchant in premises which were then situated in Ocean Road.

The business was subsequently transferred to Fowler Street. Mr Pollard, with CHARACTERISTIC ENERGY, threw himself heart and soul into the concern, and after sixteen years' labour during which time he had not a day's illness, he had the gratification of knowing that a very large amount of success had attended his efforts. He then found that he had the time and means to turn his attention in the direction of public matters, and as South Shields had been very good to him, he thought that the least that he could do was to devote his time to his interests.

Accordingly, in 1897, when he was approached by a large number of ratepayers, and invited to contest the Beacon Ward, he willingly acquiesced, with the result that he was elected at the head of the poll by a substantial majority.

Since that time, he has been most assiduous in his endeavours to promote the welfare of the community, and has always been on the side of reform. He is a member of the Finance Committee, Town Improvement Committee, Parks Committee, Free Library Committee, on all of which he had done most USEFUL WORK.

A vice-president of St. Aidan's Bowling Club, the Model Yachting Club, and the South Shields Rugby Football Club, Mr Pollard is popular with all the members of each.

A great enthusiast in the game of bowls, he has been able to get many improvements relating thereto carried through. He it was who moved in favour of the introduction of the electric light for the bandstand, and for the provision of two or three arc lamps in each park to discourage rowdyism.

Primed with these facts, I invaded Mr Pollard's sanctum in order to ascertain his views on several questions which are now before the electorate.

The tramways were naturally the first theme introduced.

''What is your opinion about them?'' I queried.

''Well, I am decidedly in favour of the trams being municipalized at the proper time, for it is a profitable for a private company to run them, it would surely be A GOOD THING for the town to have them in its own hands.''

''You see, with regard to the motive power, you can't tell what may happen in two or three years.''

''Oh, when the lease is up, if electricity is found meanwhile to be the best, I will support electric trams run by the Corporation.''

''And now, Mr Pollard, what about amateur bowling?''

''I was glad to see the people in the Beacon Ward advocating a new bowling green on the land where the Roman Station is. That, of course, would receive my support.''

''I believe you support the North Marine Park extension?''

''Most emphatically. It has received my support right through. I should like to see the palisading right to the Beacon.''

''Provision ought to be made in the extension of which I have just spoken, and as early as possible.''

''You are in favour of quay accommodation?''

''One word about the Municipal Buildings.''

''The Ogle Terrace sight is one of the finest that any town can boast of. It is really time that a---pilo of buildings WORTHY OF A TOWN with about 110,000 inhabitants should be erected. The present building was put up for a population of 15,000 or so.''

''Are there any other matters you would like to mention?''

''Just two. I am most anxious to see the streets widened, because the sooner it is done, the better it will be for the borough afterwards, in the matter of its expenditure.''

''I will support the cheapening of the electric light in order that everybody can introduce it into his or her dwelling.''

''I might mention,'' said Mr Pollard, in conclusion, ''that I am the first elected member for the Beacon Ward, and that it is my wish to continue to do so.''