Fascinating, Drawing of a Stylish lady in a 1859 Family Bible! 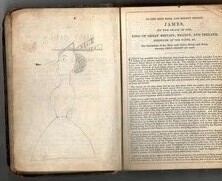 I received the Bible as a gift from my cousin, Neil in 2012. The spine is broken, crudely repaired with Elastoplasts. There are inscriptions by the two Priscilla Johnston girls (our great, great Aunt and great Aunt respectively) in the front and back of the Bible. There are also two sketches; perhaps graffiti? 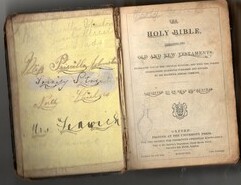 It is easy to identify the original owner of the Bible, Priscilla Johnston, sister of my great grandmother Ann Johnston (Mrs Fenwick) as well as to estimate the year, that Priscilla inscribed her personal details. 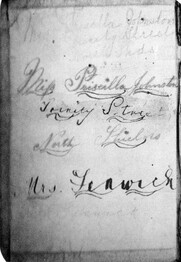 I am dating this inscription to 1862/63, four years or so after the Bible was published on the basis of the reference to Mrs Fenwick; Ann Johnston (1841-1922). She married John Fenwick (1839-1991), Boat-builder at the Wesleyan Reform Chapel on the 9th February 1862. At that time, she lived at The Bull Ring on the banks of the River Tyne in North Shields with her parents Ann Harrison (1813-1890) & Thomas Johnston (1812-1891) and her five siblings including Priscilla Johnston. The family moved soon afterwards to 22 Trinity Street, near the centre of the town, the family home then onwards for almost thirty years.

In her writing, perhaps, Priscilla was celebrating the marriage of her sister? The fact that Ann and John Fenwick, named their daughter, Priscilla Johnston Fenwick (1874-1928), suggests a close relationship between the sisters.

The Bible was presumably given as a gift by Priscilla Johnston to her niece. 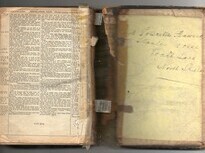 At the time of the 1881 Census, Priscilla was living at 1 Prudhoe Street in North Shields with her grandfather, parents and six siblings including my grandmother, Thomasina Johnston Fenwick who was only 5 months old.

The family moved to Stanley House, Coach Lane in North Shields between 1892 and 1895 when Priscilla made her inscription. According to the 1891 census for 1 Prudhoe Street in North Shields, Priscilla was a School Teacher.

Subsequent censuses listed her as a Clerk. She remained unmarried and died at the age of 54 years at the home she shared with her sister, Sarah Ann Barlow Fenwick (1876-1932). 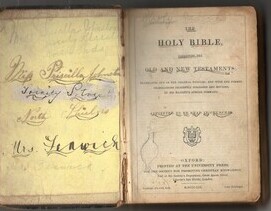 This drawing of a duck-like character is possibly a caricature.

The second drawing is of an armless, slim woman, with perfectly coiffured hair and stylish hat decorated with ribbons. When I have blown up the image, 'Holy Bible' is more clearly visible from the preceding page. 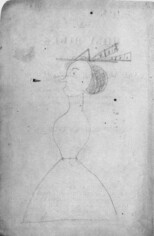 As a child, when she was given the Bible, she was of primary school age and I had initially thought that the elder Priscilla Johnston had made the drawings whilst she was still living at the Bull Ring before moving to Trinity Street. The consensus of opinion including that of my lovely young grandchildren, is that artist was about ten years old therefore, which would be dating the drawing to 1851.

However, on researching the style of hat, this is from the late 1860s well before Priscilla Johnston, the second owner of the Bible was born and also unlikely that Priscilla, the original owner at the age of twenty-five or so, would be making such drawings.

Sadly, to summarise, I am unable to authenticate the artist. Perhaps, one of Priscilla Johnston's siblings made the drawings such as Isabella born in 1851.

The Bible I was given as a present by my cousin, Neil on the 30th May 2011, like me, a great grandchild of Ann (Johnston) Fenwick. He found the well-worn Bible in the possessions of his late mother Muriel (Young) Tunningley (1909-1998) in South Shields taking to his home in North Yorkshire.

Priscilla, although married twice did not have any children. I estimate that after the 1881 census and following her first marriage, she gave the Bible to her niece, Priscilla Johnston Fenwick (1874-1928), the sister of my grandmother, Thomasina Johnston (Fenwick) Young (1880-1974). It was on the death of Sarah in 1932 at 1 Stanley Street, West in North Shields, Priscilla Johnston's sister, that my grandmother as executor and beneficiary to her estate cleared the family home and I am assuming that she kept the Bible as a memento of her family.

Even in her 90s suffering from Alzheimer's, Thomasina would talk of her sisters, Cilla (Priscilla) and Sally (Sarah) with great affection, often calling my Mum, Vera, her daughter with either of their names.

It has been fascinating developing the story of this North Shields Bible although incomplete, as I am unable to identify the graffiti artist! Nevertheless, now a treasured possession.