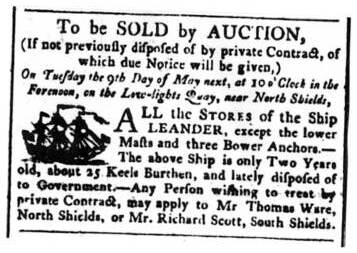 From Arctic Whaling to Red Sea Lighthouses; Shipbuilding and Ship Ownership in South Shields and Sunderland to Bottle-Manufacturing and Amazing Properties!

It was Amy Flagg's book of 1979 'Notes on The History of Shipbuilding in South Shields 1746-1946' (1) that heightened my interest in shipping especially shipbuilding in the town. my home town. It was in this book that I learned about James Evans's, father, and son (1715-1800) and (1750-1839) respectively, my direct ancestors who were not only mariners but also significant shipbuilders, ship repairers and ship owners in South Shields.

This has proved to be of great value in the context of writing about the Scott family, although there is only a mention of Richard Scott in the selling of …., it is the marriage of his son, John Scott (1788-1851) in 1811 to Ann Horn at St. Michael & All Angels Anglican Church, Bishopwearmouth (now part of Sunderland), (3) that suggested to me that there was a possible connection to the shipbuilding fraternity of the late 18th and late 19th centuries on the rivers Tyne and Wear.

Later in 1811, following the death of Thomas Nicholson, his son Robert Nicholson together with Thomas Horn developed a successful yard at the West Docks with eleven ships being built during this partnership which was dissolved in 1817. (4) 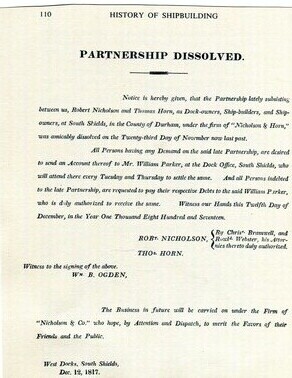 (5)
Subsequently they sold the yard to Cuthbert Young in 1817, the founder of another South Shields ship-building dynasty which continued until 1880 when it was subsumed into John Readhead's Companies and yards. (6).

Thomas Horn died in 1821, his daughter was a significant beneficiary enhancing the fortune of John Scott:

Other than a ship owner his prominent business was in the manufacture of glass bottles at Ayre's Quay, on the south side of the River Wear. Ayre's Quay Bottle Works was developed in 1820 by Philip Laing, John Scott, Thomas Bonner (1781-1841) of Monkwearmouth, Philip Hubbard and Nathan Horn, jnr. Later it evolved as Laing, Horn & Scott Co. In 1832 there were two glass-houses which had expanded to six by the 1850s. 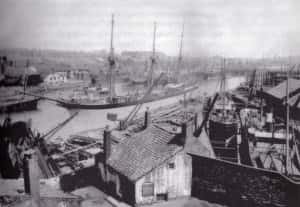 Dated 1858 it shows the location of Scott and Horn's Bottle-works on the south side of the river before the first railway bridge was built in 1879.

John Scott also shared ownership with Nathan Horn, Jnr, a nephew of his wife Ann (Horn) Scott of quarries at Cox Green and Penshaw in County Durham which provided the superior quality firestone for building the furnaces at Ayre's Quay (8.p.26)

Finally known as the Ayres Quay Bottle Company (Laing, Horn, Scott, and Co.) 1869-1923, it was one of only two to survive into the twentieth century. In 1942 a shipbuilding berth was built on the site by James Laing, a descendant of Philip Laing.

It is worthy of note that all three families had connections with South Shields through shipbuilding in the late 18th and early 19th centuries and that it was through these associations that their bottle making company developed:- John Scott via his father, Richard Scott operating at James Evans Yard at the Market Dock; Philip Laing via his partnership dock at the Lawe and Nathan Horn, jnr. via his grandfather Thomas Horns' docks.

By 1820, the year that the bottle-making enterprise commenced, as the demand for ships was diminishing following the end of the Napoleonic Wars so shipbuilding became a less-lucrative industry whereas the demand for glass-bottles had started to surge. An already functioning business on the Wear provided the opportunity for the speculators to diverge from shipbuilding. Laing and Horn would have knowledge of glassmaking in South Shields and as indeed would John Scott as James Evans Market Dock where his father Richard Scott was employed was in close proximity to Cookson's glassworks, inaugurated in 1752 and managed by Isaac Cookson (1745-1831) during the period of their ship-building enterprise.

Records of John Scott in Bishopwearmouth

I have located several records which provide evidence of John Scott's life on the south side of the River Wear starting with 1815 when he lived at Numbers Garth which was parallel to Sunderland Street and Russell Street.

In 1832 he evidently continued to live in Lambton Street (9)

According to the 1841 census he had settled in prestigious Fawcett Street in Bishopwearmouth where he remained until his death in 1851.

The occupants of the house other than the Scott family hailed from north Northumberland which is where John Scott's grandfather John Scott (17-18) was born before settling in South Shields. I have written earlier that the Connection between John Scott and his son Richard Scott with my James Evans lineage may well have been that their formative years were in this part of Northumberland and that connections were maintained.

Philip Laing (1772-1852) figured prominently in the life of Robert Whittham (Part 2) with the initial friendship probably having developed in South Shields. Between 1807 and 1845, James, John, Paul & Philip Laing built in South Shields fifty-four ships. The initial partnership was dissolved in 1822 and Philip Laing set up at the Lawe with a "patent slipway near the sea" which was possibly James Evans Jnr's yard as that is when he retired.

Philip Laing like John Scott also lived in Fawcett Street, Bishopwearmouth. As I have been unable to track down any images of John Scott, I am including two of Philip Laing.

Some of Richard Scott's grandchildren were very successful in business especially through their bottle-making enterprises and seemingly fortuitous marriages including in some instances to their 'Horn' cousins! 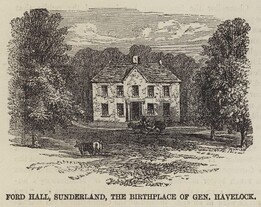 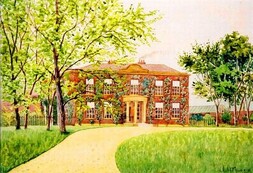 Major General Sir Henry Havelock KCB (5 April 1795 – 24 November 1857) was a British general who is particularly associated with India and his recapture of Cawnpore during the Indian Rebellion of 1857 (First War of Independence, Sepoy Mutiny).

2. Bainbridge Holme: Sarah Scott (1814-1884) & Allen Horn (1813-1878) lived here which had formerly belonged to the Pemberton family who were also associated with Cleadon Village. Sarah Scott aged 42 years married Allen Horne, a widower, and her cousin on the 15th April 1856 at Bishopwearmouth. He was the son of Nathan Horn (1787-1859) and grandson of Thomas Horn (1749-1821). Walter Horn, son of Nathan by his first marriage was a glass-bottle manufacturer. 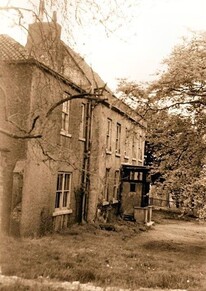 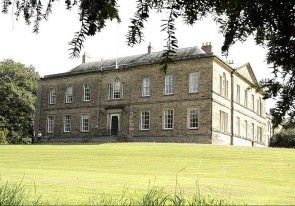 4. 7 John Street: home of William Horn Scott (1820-) and Jane Scott (1820-), William was a Glass bottle manufacturer and he lived at this address with his wife and children including five sons. 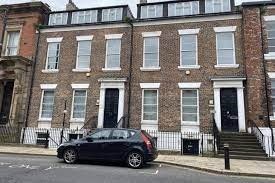 As a final profile, I am including the biography of Charles William Scott, the youngest grandchild of Richard Scott who he too, was an adventurer not as a Captain of a whaling vessel but as an Engineer and Surveyor in Canada, the Bahamas and Egypt.

He was the youngest son of the late Mr. John Scott, of Sunderland and was born on the 12th of January 1831. He was educated at Sunderland, Edinburgh, and Brussels, and at an early age was articled to Thomas Meik the Engineer to the Commissioners of the River Wear whilst the docks at Sunderland were under construction.

Then for three years he was employed as a surveyor during the construction of the Grand Turk Railway in Canada. This was followed by another three-year contract in the Bahamas, at Lobos Gay and at Great Isaacs, where he was in charge of the erection of two important lighthouses and surveyed several other sites in the area. He was meticulous in ensuring the health of the workers (previously ship-wreckers, pirates, or even worse!). and that there were adequate supplies which often had to be transported between 100 miles to 200 miles to the sites.

On returning to England after a few months he was appointed to complete the erection of three lighthouses in the Red Sea. Unfortunately he contracted dysentery in 1862 and although he was able to return to England to live with his brother in Lee, Kent he died at the age of 31yrs on the 11th of January 1863.

'Mr. Scott was devoted to his profession, and had abilities of a high order. He had the faculty of obtaining and retaining the respect and regard of those under whom he served, and amongst his relatives and friends he was universally esteemed for his quiet and unobtrusive manners, from which, aided by his industry and great perseverance, they had looked forward to his taking a high position in the profession he was so ardently attached to'. Abstract of obituary of 1864: (12)

This provides a befitting ending with Charles William Scott showing traits of his grandfather Richard Scott in caring for construction workers in the Bahamas just as Richard Scott protected his crew on the vessel 'Kitty' in 1779 on returning from a successful whaling voyage to the Arctic from the awaiting Press gang at the Port of Newcastle upon Tyne. Durham County Advertiser - Saturday 12 February 1820 (13)

I recall an area of Ayre's Quay as a site used for the University of Sunderland, American Football team where my son Alex (manager of this site) played in 1986. Also it was the Jewish burial ground which I referenced in Russell Bowlby Part 6B.

The buildings shown in John Street previously housed the Sunderland Education offices which I recall attending when I was applying for a teaching position in 1969.

The biography of Charles William Scott does provide an insight into his education and training which I have been unable to source for his siblings.

Information about shipping and shipbuilding is now easier to access via the internet than it was when I started researching the lives of significant men in South Shields emanating from my transcription of minutes (which I started in 2011) of two early South Shields libraries, the Free Library at the Lawe (1788-1802) and the Exchange Subscription Room in the Town Hall in the Market Place (1800 -1855). However, to date there has not been an attempt to cross-reference the ship building and ownership between that of the Rivers Tyne and Wear. Through this, my current writing I have learned of the connections between the two of several significant families:- Blenkinsop, Horn, Nicholson, Laing, Scott.

The Laing partnership was dissolved in 1822 and Philip set up at the Lawe with a "patent slipway near the sea". This was probably a piece of ground near the Low Beacon and possibly gives me an ancestry connection to the Laing family as Philip Laing most probably established his yard on the site of the James Evans (direct line) yard, at the Lawe in 1822.

It was through my accessing 'The Records of the Company of Shipwrights of Newcastle upon Tyne, 1622-1967,' volume 184, edited by David Rowe & published by The Surtees Society in 1970 at Durham Archives in 2019 that I learned of Richard Scott and his connection to James Evans and James Evans jnr. that stimulated my interest in Richard Scott resulting in my writing the three parts of this post.

Finally, Richard Scott perhaps envisaged (as suggested in his will) the life of his wife Hannah, son John and daughter Hannah in rural bliss at Harton House Farm not at in the town of Bishopwearmouth. He could have anticipated continued ship-ownership but not the wealth of the shipping and bottle-making fraternity therein.