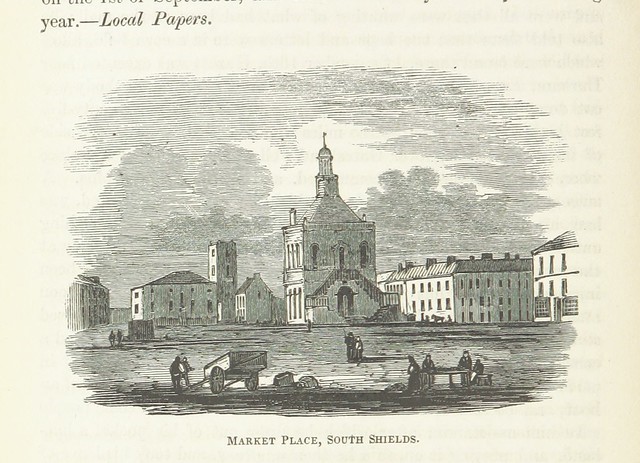 It was not until the 10th December that the hustings were erected in the Market Place and that the election actually commenced at 10am the following day.

Richard Shortridge, the returning officer, read the regulations relating to bribery and corruption, and then administered the oaths of the poll clerks. The candidates were proposed and seconded before being allowed to address the crowd.

Robert Ingham spoke first, loudly cheered by his friends whilst being jeered by those of William Gowans. He concentrated on the fact that the Borough of South Shields was now free and that he would be proud to be elected its first Member of Parliament. Ingham apparently did not take the opportunity to talk about his policies or indeed those of the Conservative party, which he was representing but rather to concentrate on his good fortune as being elected as the candidate and to thank his supporters.

Russell Bowlby in his address criticised the dictation of the Independent Election Committee, comments which were greeted by Hisses and Cheers. He then talked about his policies including Reform of the law saying that the law was 'humbug' which as a lawyer himself, 'he asserted boldly, that it would be better that the whole set of lawyers should starve, than the people of England be tyrannized over by a grasping set of licenced plunderer's' (2).

From his early years of living in Durham, where his father, John Bowlby was Registrar to the Dean and Chapter, Russell Bowlby could and did speak with authority on his quest for church reform, stating that the wealth of the church was being plundered just as it had been during the Reformation at the time of Henry VIII (Part 5). Describing himself as a second abolitionist Russell Bowlby said that further action was required to abolish the slave trade completely. Then he announced his withdrawal from the election, accepting that he would not be elected, but insisting that his name should remain on the ballot paper, and that those who had pledged their votes to him should cast them elsewhere.

It was the signatures of two distinguished residents of the new constituency that account for the two votes polled for Russell Bowlby. They were Dr John Straker, an intellectual, a ship-builder and ship-owner and James Edwards, also a ship-builder and ship-owner. They proposed and seconded Russell Bowlby respectively, since he had been the candidate with the longest residence in South Shields, 'not only being borough-placed, but a thoroughbred reformer'.

In his address, George Palmer said that he was campaigning to promote the shipping interest not only for the ship-owners but that: -

'without a prosperous state of that great interest the ship-owner cannot pay the wages of the seamen. (Loud cheers.) It is my ardent wish to see the honest, brave and industrious seamen happy and comfortable.' (3).

He went on to state that he was concerned that Robert Ingham would not vote to ensure that the protectionist treaties, especially regarding the timber trade, would be maintained.

James Mather, in proposing the nomination of William Gowans, indulged in much caustic satire and invective against Russell Bowlby, Robert Ingham and their supporters. He said James Losh, the Recorder for Newcastle, was aged and infirm, and that Robert Ingham was doubtless looking forward to being his successor.

William Gowans' speech was apparently the longest, lasting over an hour. He talked about the need for a Secret Ballot; the gradual repeal of the Corn Laws; Triennial Parliaments; Church Reform whereby church property would be controlled by government commissioners and Law Reform. Agreeing with Russell Bowlby, that the law was ''humbug'' he said that the Lord Chancellor, who, as a judge, should be confined to his judicial duties and that the Court of Chancery should be reformed 'to prevent the property of suitors from being frittered away and pillaged by lawyers.' Gowans believed in free trade, the removal of the monopoly by the East India Company and the opening up of trade to China.

It was his contention and in clear opposition to George Palmer's views, that the duties on Baltic timber should be reduced, as it was superior to the heavily - protected Ã¢€˜dry-rot, bug-generating, dear and inferior timber from Canada (4). In contrast to the opinion of the other Radical candidate, Russell Bowlby, he did not believe in the complete eradication of slavery, rather in maintaining adults as slaves whilst gradually liberating subsequent generations. Gowans was perhaps reflecting the views of James Mather who had a vested interest in the continuation of slavery rather than those of other radical candidates nationally. During the 1830's he petitioned for recompense for the slaves his wife owned in Jamaica. William Gowans was confident of success.

Following the speeches, Richard Shortridge, the returning officer, asked for a show of hands, with the majority of people voting for William Gowans. Robert Ingham and George Palmer were not satisfied and demanded that there should be a poll, with pollsters recording their votes. It was agreed that this would take place the following morning, concluding at 1pm on Wednesday, the 12th.

There was great indignation at these results. William Gowans gave vent to his disappointment 'in violent speech'. George Palmer's friends planned to petition that Robert Ingham be disqualified as holding a judicial office, the Recordership of Berwick. He had made caustic comments about Joseph Hume. The language used in the election campaign, both spoken and written, was characteristic of the invective and political machinations popular at the time of King William IV, which almost two centuries later is impossible to translate into the language of today and apparently it was even impossible to do so in the 1860s. Reflecting on the 1832 elections almost thirty years later, Thomas Salmon wrote: -

'party spirit ran very high, but much of the point and sarcasm, which at the time were apparent enough and easily understood will now be a sealed book to many' (5).

I have come to the conclusion, from my research, that there was a strong possibility that Russell Bowlby could have been the first Member of Parliament for South Shields. If he had declared his intention to stand as a Radical candidate as soon as it had become evident to him that he would not be endorsed as the Liberal candidate in early July 1832 rather than testing the electorate via a nom-de-plume, he might well have secured the endorsement of the Independent Election Committee. It was not until August of 1832, that William Gowans was proposed as a contender and supported by James Mather.

As the longest serving resident of South Shields Russell Bowlby was closely connected to many of the significant families of the Borough through his political interests, his law practice and his developmental plans for the Borough and greater Durham county, which I will discuss in Part 4. He did represent several of the Borough factions including some of the ship-owners, ship-builders and the church reformers. He was committed to free trade, opening up shipping opportunities and the disestablishment of the control of the East India Company, which had prohibited direct trade with the Far East. Concerned for the Poor, he wanted to repeal such punitive measures as the Corn Laws, which adversely affected them by controlling the price of this vital commodity. Russell Bowlby regarded the Reform Act of 1832 as only a starting point in the road to wider enfranchisement of the population.

Once Russell Bowlby withdrew his candidature the voters who were committed to him (Whigs and Radicals) might not have transferred their votes to William Gowans or Robert Ingham, but could have decided to support George Palmer, with his declared interest in shipping, significantly increasing his votes. Of the 76 eligible voters who did not cast their votes it was claimed that the majority were absent at sea, which may not have been the case as some might have been disaffected voters, who without Bowlby opted not to vote.

''With respect to Mr Bowlby, he must say, he believed there has never been a more honourable canvass than Mr Bowlby's''.

Perhaps Ingham was acknowledging that he had replaced the most capable and deserving candidate in this election, Russell Bowlby. I leave the final comments to Thomas Place/Russell Bowlby: -

'It now only remains to say the painful word - FAREWELL! ..... It was however observed to me, by my friend Mr Thomas Day, that ''There's many a slip between the cup and the lip,'' and I find from the result, that his characteristic shrewdness, had not escaped him, in making this trite, though perfectly correct observation.'