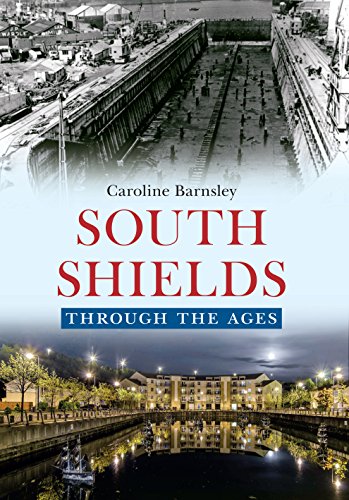 I am delighted to be able to endorse this second well-researched book by our talented local historian and librarian, Caroline Barnsley. Building on the success of her previous book, Caroline again provides us with the opportunity to celebrate the history and development of South Shields with a particular emphasis on settlement close to the River Tyne, including the establishment of the fort built by the Roman Army in AD160, the Customs House and Harton Staithes. It is the riverside regeneration scheme which now as Caroline says, is forging a new relationship for the people of the town with the river.

This fascinating selection of Post Cards and old photographs is greatly enhanced by the fantastic photographic skills of Dave Barnsley. The undoubted highlight for me is the magical image of the Irene Brown’s 2004 stainless steel sculptures of seventeenth century collier brigs at the Market Dock, an area not usually on the tourist trail but which was at the heart of our maritime heritage. Countless ships were built and launched from this very dock serving an extensive international market. Caroline and Dave even show that some seemingly unattractive landmarks, such as the restored gasometer during twilight, has a certain beauty.

It was the Market that was seen by generations of folk from South Shields as the centre of the town. The Old Town Hall was the base of the first town centre library over two hundred years ago and it is with this in view that the new library and community hub for South Tyneside is being built. Caroline provides an interesting insight into the development of the libraries and museum. Her wry sense of humour is particularly evident when she relates the story of the relocation of the ‘Golden Lion’ from the former public house in King Street to the museum forecourt. The lion is no longer golden but it appears that he never was, as his tongue was green!

Caroline's abiding love of animals is again evident from her moving stories about South Shields very own 'Wandering Willie', the Guinness menagerie which describes the emblematic symbol of the toucan, and finally to the local seagulls of which she talks affectionately, although they are considered by many of the town to be a scourge.

Caroline engages with the reader, through her clever selection of images supported by a miscellany of facts embedded in a concisely written text. A variety of techniques are employed; sometimes information is presented in chronological order; elsewhere there are titbits encouraging the reader to look further. This is especially true in Caroline's use of potted biographies of some famous and yes, infamous people of the town; Amy Flagg, Dolly Peel, Isaac Cookson, Robert Darling (nephew of Grace), Sir William Fox, King Neptune (Bill Lodge) and Giuseppe Minchella to name but a few.

With the publication of two books in two years, Caroline has already made an important contribution to our knowledge of our beloved town. I hope she can continue in her endeavours.