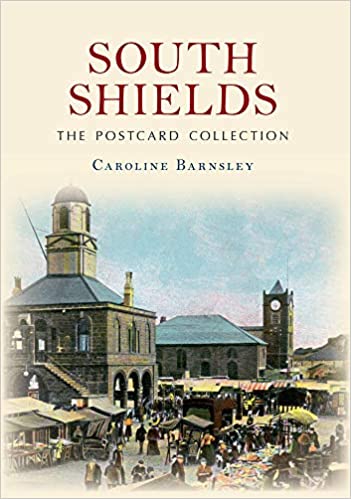 It is a pleasure to say a few words in support of Caroline Barnsley, South Tyneside’s latest author and in my opinion a most promising local historian. In her book she provides us with the opportunity to celebrate the history of South Shields through a brilliant snapshot of life in the town over a period of almost 150yrs with a glance at the lives of ordinary people who came to visit. In fact for me this is the second opportunity as I have had to endorse her wonderful book as I already have the privilege of writing the Introduction.

Caroline is an avid post card collector-a deltiologist to give her the correct name and she provides an invaluable insight into her hobby, explaining classifications, commenting on design and market value and listing publishers and printers located in the town and abroad. So the book is ostensibly a collection of over 100 post cards many of which have been so lovingly restored by Caroline’s husband Dave so that all the images are in pristine condition.

For me and I am sure for many of you here today it is more than that it a short visual History of South Shields. Caroline offers an interesting perspective borne out of her extensive local knowledge. It is a lively & fascinating book. She has presented her material from a geographical, rather than chronological, perspective which is not only interesting but also helpful in understanding the development of the town.

The areas she covers include Westoe Village previously part of the township of Westoe with images of the homes occupied by many distinguished families during the 18th & 19th centuries such as La Tourelle, the Briary, Sunny Lea & the White House with the Gazebo still in evidence in Horsley Hill Road. I am particularly fond of the post card of Harton Hall in Harton Village which Janis Blower also featured in an excellent 2 page spread in Wednesday night’s Gazette. Part of the building is now one of my favourite enterprises 'Posh Wash'.

On Saturday there is the official opening of the fabulous development at Littlehaven of the Sea Wall including a firework display invoking the Annual Illuminations in the South Marine Park which commenced at the opening in 1890. Caroline’s postcards gave me the opportunity to visualise the staggering range of developments that have preceded this in the sections entitled ‘Along the Prom’ and ‘Marine Parks & the Sea Front’. The Outdoor Bathing Pool on the North Foreshore opened in 1923 functioning until just before the Second World War, now of course almost on the same site as our latest swimming and leisure pool, Haven Point.

Like Caroline, I share a proud South Shields lineage of the courageous Tyne Pilots dating back to the early 17th century. The images of the Life Brigade House on the Pier are particularly poignant as this is where my great grandfather Thomas Young following the capsizing of his coble boat on the Black Midden Rocks during a dreadful storm was pronounced dead on the 14th October 1881.

This fascinating selection of Post Cards traces some of the many ways in which South Shields has changed and developed over the last century. Marsden Grotto which deservedly figures prominently in Caroline’s book has changed because of the ravages of the weather whilst in particular King Street has suffered because of the impact of commerce and the emerging shopping patterns of us residents. I have to mention M&S which only ceased trading in the street on Saturday. Such a sad loss to South Tyneside, however, Caroline spotlights the store in the Downtown section. Of course we refer to the town centre as Down Town not as Downtown as they do in the United States!

When I first met Caroline in this very building several years ago, it was her enthusiasm for maps and her understanding of so many seemingly complicated local maps that first impressed me. At the end of the book there is an invaluable collection that supports the text.

It is Caroline’s writing that deservedly requires a special mention. Her literary style is succinct, offers a wide vocabulary, never boring and often quirky. Through her writing she brings many of the characters who have written the post cards to life complimenting their often brief messages with incidents seldom recorded. In fact Caroline’s writing and clever sequencing of postcards was immediately applauded by Amberley Publishing and accepted at the first draft; something which seldom occurs. Well done Caroline.

So I hope that you are like Molly, Len and Doris “having a nice time, we have been here two days running (our shoes will need resoling) Molly is sunbathing, the weather is lovely. Not of course like it is today.