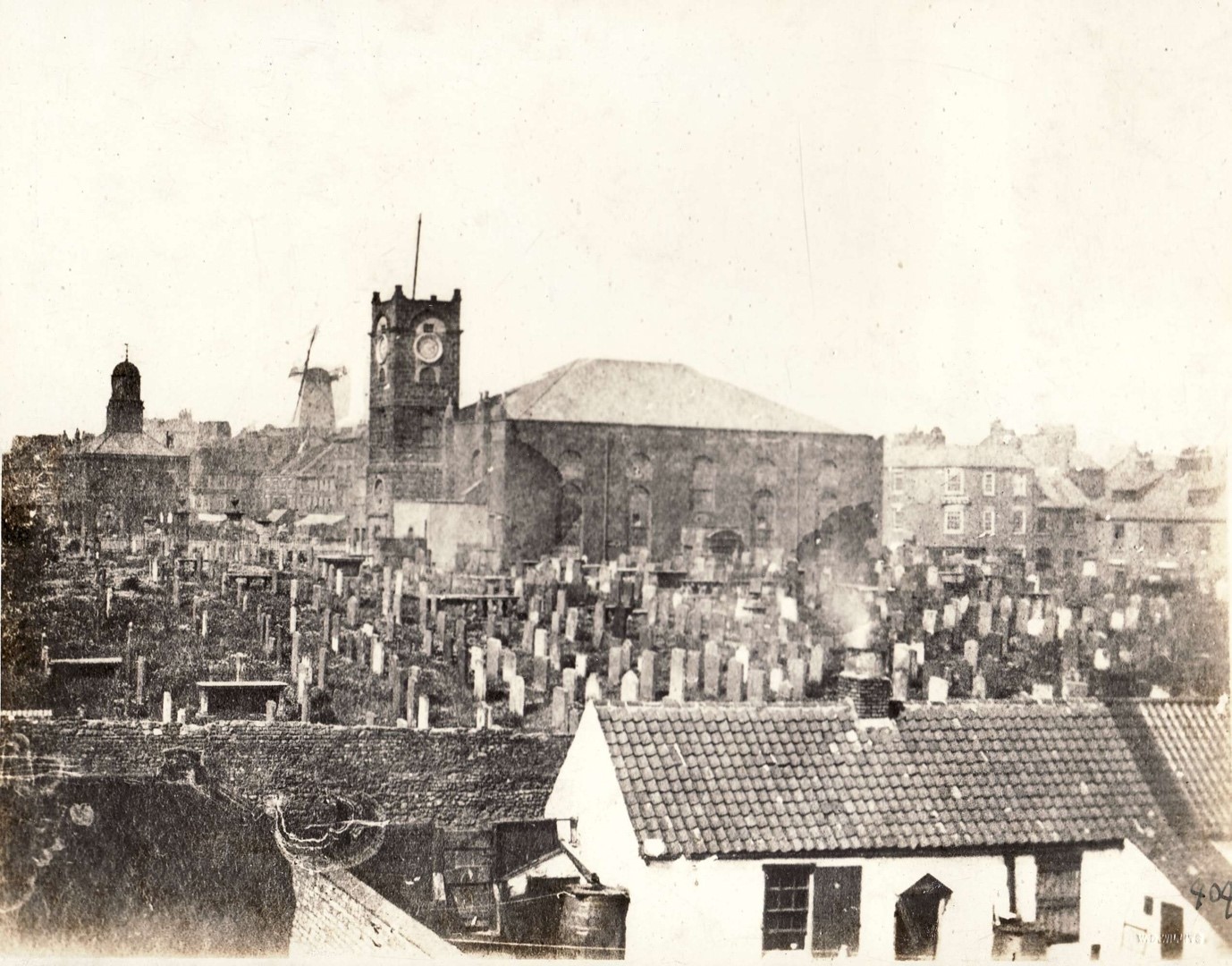 WHAT HAPPENED?
I decided to act by writing to the Civic Offices (Irene Lucas, Chief Executive South Tyneside), the MP's for South Shields and Jarrow & Hebburn, David Miliband & Stephen Hepburn respectively; the Dioecian Office of the Palatinate of Durham, Stuart Bain, Archdeacon of Sunderland, Canon Peter Stannard, Vicar at St Hilda's Church, Northumberland and Durham Family History Society and the Editor of the Shields Gazette.

I was overwhelmed by the emails and telephone calls I received within a couple of weeks including from agents of the MP's, representatives from South Tyneside Borough Council as well as a more substantive correspondence from the Dioecian Office in Auckland Castle, County Durham, and Cannon Stannard who was oblivious to removal of bodies buried so closely to his church.

1. The response from the local newspaper was immediate and I was interviewed by journalist Paul Myles-Kelly; I was asked to pose beside an empty grave within the churchyard for a photograph which I declined with the incumbent vicar, Canon Peter Stannard obliging. Prior to my contact with him, he had not been consulted and had no knowledge of the action taken by the developer, Henry Boot. 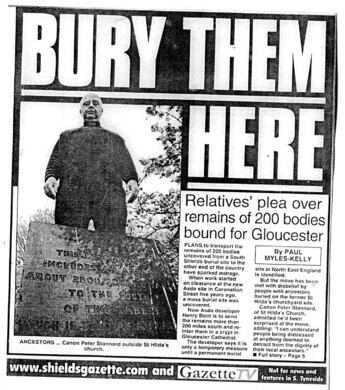 2. Meanwhile, interest continued to be shown by the newspaper with this in-depth article by journalist Paul Myles-Kelly on the 24th April 2009. From his enquiries it was established that at this stage that â€˜no analysis of the bones had yet to be carried out. Any move to re-bury the bones would require approval from the Ministry of Justice. 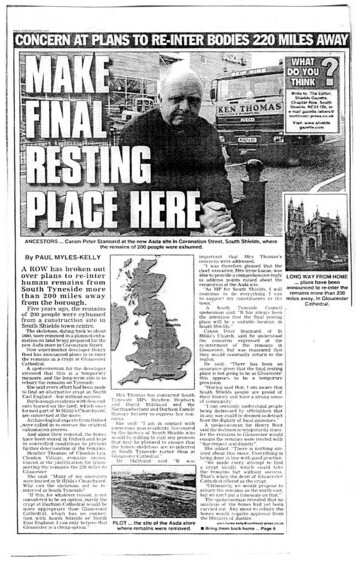 A row has broken out over plans to re-inter human remains from South Tyneside more than 200 miles away from the borough.

Five years ago, the remains of 200 people were exhumed from a construction site in South Shields town centre.

The skeletons, dating back to about 1800, were removed in a planned exhumation on land being prepared for the new Asda store in Coronation Street.

Now supermarket developer henry Boot has announced plans to re-inter the remains in a crypt in Gloucester Cathedral.

A spokesman for the developer stressed that this is a temporary measure, and the long-term aim to rebury the remains on Tyneside.

She said that every effort had been made to find an alternative crypt in North East England-but without success.

But borough residents with descendants buried on the land, which once formed part of St Hilda's Churchyard are concerned at the move.

Archaeological experts from Oxford were called in to oversee the original exhumation process.

And since their removal the bones have been stored at Oxford and kept in controlled conditions to prevent further deterioration of the remains.

Heather Thomas, of Cleadon Lea, Cleadon Village, remains unconvinced at the justification for transporting the remains 220 miles to Gloucester.

She said "Many of my ancestors were buried in St Hilda's Churchyard. Why can the skeletons not be reinterred in South Tyneside?"

She said "I am in contact with numerous non-residents fascinated by by the history of South Shields who would be willing to sign any protests that may be planned to ensure that the bones/skeletons are re-interred in South Tyneside rather than at Gloucester Cathedral."

Mr Miliband said: "It was important that Mrs Thomas's concerns were addressed."

"I was therefore pleased that the Chief Executive, Mrs Irene Lucas, was able to provide a comprehensive reply to address points raised about the excavation at the Asda site."

"As MP for South Shields, I will continue to do everything I can to support my constituents in the town."

A South Tyneside Council spokesman said, "It has always been the intention that the final resting place will be a suitable resting place in South Shields."

Canon Peter Stannard, of St Hilda's Church said he understood the concerns expressed at the re-interment of the remains in Gloucester, but was reassured that they would eventually return to the region.

He said: "There has been an assurance given that the final resting place is not going to be in Gloucester: this appears to be a temporary provision."

"Having said that, I am aware that South Shields people are proud of their history and have a strong sense of community."

"I can certainly understand people being distressed by officialdom that in any way could be deemed to detract from the dignity of local ancestors."

A spokesman for Henry Boot said the decision to temporarily transfer the remains to Gloucester would ensure the remains were treated with "due respect and dignity."

She added: "There is nothing sinister about this move. Everything is being done in line with good practice."

"We made every attempt to find a crypt locally which could take the remains but without success. That's when the Dean of Gloucester Cathedral offered us the crypt."

"Ultimately, we would propose to rebury the remains in the north east, but we can't put a timescale on that."

The spokesman revealed that no analysis had yet been carried out. Any move to rebury the bones would require approval from the Ministry of Justice.
paul myles-kelly@northeast.press.co.uk

3. A profile of the issue was further highlighted by the Editor who made it his leader article in the Comments Page. 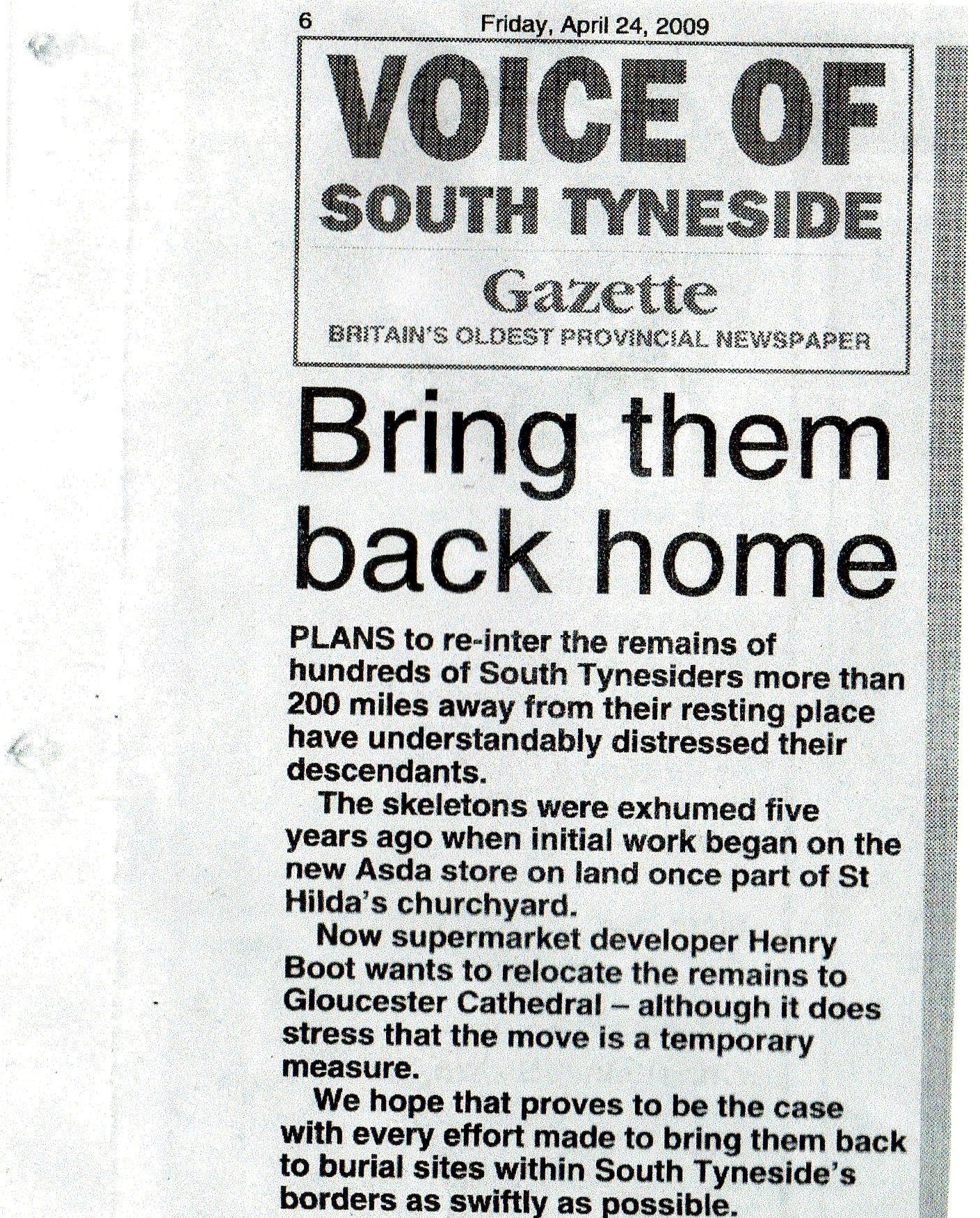 4. This is another excellent example of Paul Myles-Kelly investigative journalism presented in the newspaper on the 9th June 2009. By this date, I had commenced my research and had started typing-up the mass of info I found at the Durham Archives and at the National Archives at Kew. I was described as a 'history buff' and for the first time it was acknowledged that the churchyard was the site of numerous burials. 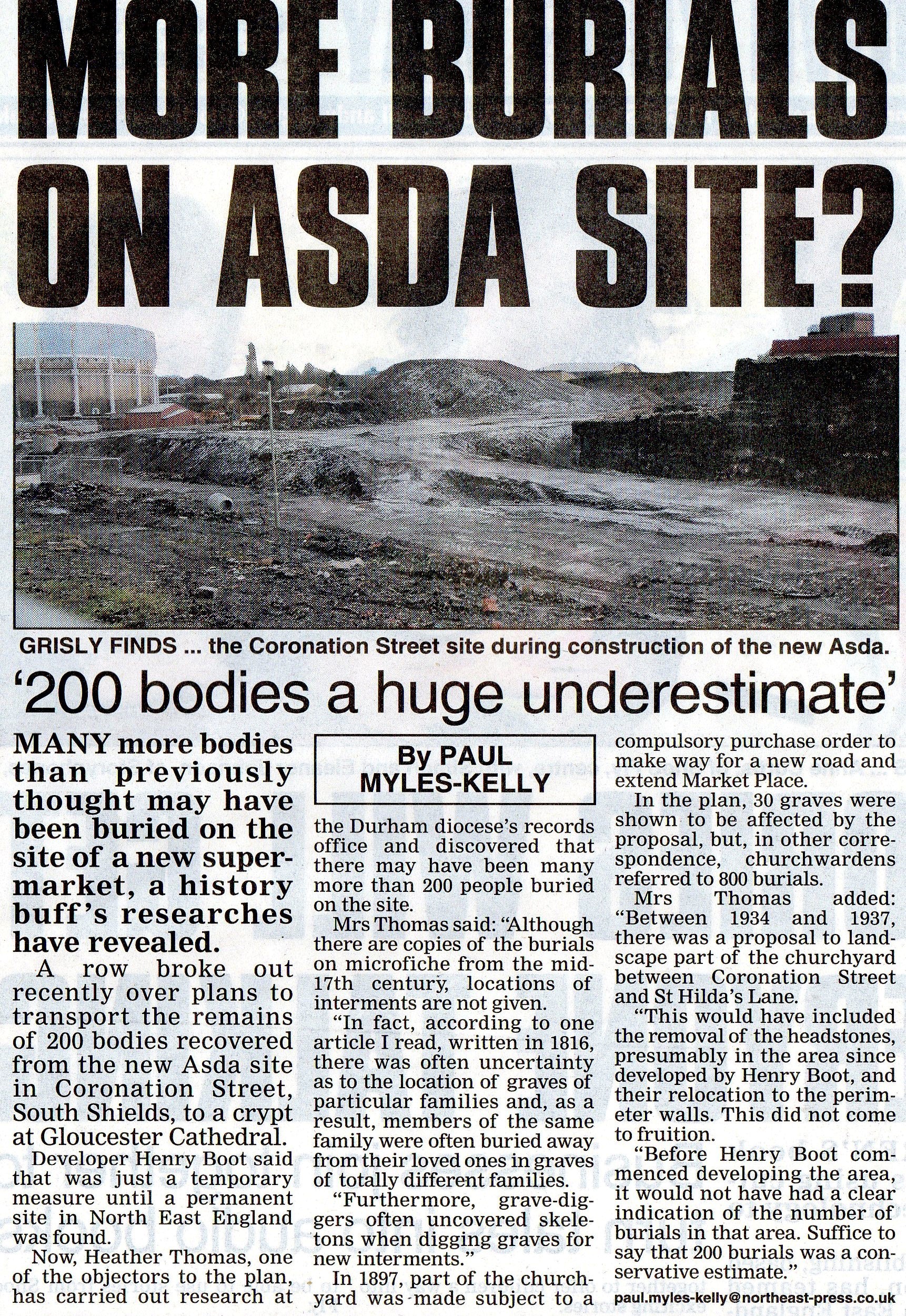 Many more bodies than previously thought may have been buried on the site of a new supermarket, a history buff's researches have revealed.

Developer Henry Boot said that was just a temporary measure until a permanent site in North East England was found.

Now, Heather Thomas, one of the objectors to the plan, has carried out research at the Durham diocese's record office and discovered that there may have been many more than 200 people buried on the site.

Mrs Thomas said: "Although there are copies of burials on microfiche from the mid-17th century, locations of interments are not given.

"In fact, according to one article I read, written in 1816, there was often uncertainty as to the location of graves of particular families and, as a result, members of the same family were often buried away from their loved ones in graves of totally different families.

In 1897, part of the churchyard was made subject to a compulsory purchase order to make way for a new road and extend the Market Place.

In the plan, 30 graves were shown to be affected by the proposal to landscape part of the churchyard between Coronation Street and St Hilda's Lane.

"This would have included the removal of the headstones presumably in the area since developed by Henry Boot, and their relocation to the perimeter walls. This did not come to fruition.

'Before Henry Boot commenced developing the area, it would not have had a clear indication of the number of burials. Suffice to say 2000 burials was a conservative estimate.

Following the last article written by Paul Myles-Kelly the subject ceased to be newsworthy. Gradually the people who had shown interest during 2009 were no longer in post and therefore no automatic follow-up ensued. I have compiled a file of the associated correspondence.

For a further four years, I continued with my research which I have written-up for Parts 3 & 4. However, I must admit that my enthusiasm for the project waned as I pursued several other areas of historical interest. Since 2014, I have continued collecting information; this will be the basis of my writing for Part 5.

There are gaps in the documentation accumulated especially between 1897 and 1936 and then after 1947. Most gravestones were still in place in 1897 and although some were removed for the road improvements in that year and in 1898 there is no evidence to support the fact that many were evidently removed by 1936.

It was at least five years before any further information was available and this was an archaeological report sent to Newcastle City Council. I was privileged to have access to reading this but it was a document not available for circulation therefore I am unable to report the findings. Furthermore, I could not identify any of the corpses or their graves from the archaeological investigation which was rather disappointing.

I was and still continue interested in not only the removal of skeletons from the proposed development of the Asda Store, but the wider issue of the missing gravestones for thousands of burials. Writing today, I still cannot establish what happened to the gravestones and indeed the skeletons interred. Now, I am taking this opportunity, firstly to share information on the 2009 issue as I have recorded, but also my research into the demise of St Hilda's Graveyard.