PART 1: Years of Hope and Adventure

Whilst researching William Young of South Shields and Shadwell (a), I returned to the baptism record for Mary Rio Middleyard, which links the two towns, shares a South American connection together with another 18th/19th century sailing ship!

All of the Middleyard's in my writing are of my bloodline dating back to at least 1605 in Earsdon, north of the River Tyne with Archibald Middleyard. It was Thomas Middleyard, my 6th great grandfather who was the first to settle on the South Shields riverside in about 1711.

This very detailed record is for the baptism of the daughter of William and his wife Elizabeth Clark at St Paul's Church, Shadwell in 1809:

TRANSCRIPTION
Middleyard: Mary Rio Daughter of William Middleyard Master Mariner and Elizabeth his wife of South Shields in the County of Durham born at Rio de Janeiro in the Brazils, in South America on the fourth day of December 1808, (the Ship's Name is Mary, she was then in the River Rio, now at Mr Blenkinsop's) 5 Months old (b).

It was in St Paul's Church, Shadwell that my curiosity about the life of William Young started with his burial in the churchyard in 1832. Mary Rio Middleyard's parents William Middleyard and Elizabeth Clark had married at this very church on the 20th January 1808. The Banns had been read at St Hilda's Church in South Shields and approved at Durham via the Faculty Marriage Licence Allegation procedure. Links again between the riverside churches in South Shields and Shadwell (c). 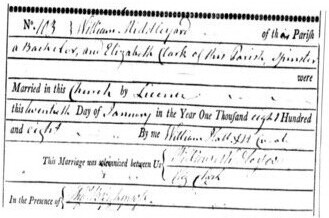 It is worthy of note that both bride and groom were literate. As a Master Mariner, this was a requirement; he possibly learned to read and write at home, honing the skill during his indenture which he may well have commenced when he was only twelve years old. Elizabeth's signature suggests a level of competence, and indicative that she had a reasonable level of education.

Summary of the Marriage from the Bishop's Transcripts

Thomas Blenkinsop (1749-1819) and his wife Sarah, are listed as witnesses and it was his 'yard' that William Middleyard's ship was berthed at the time of the baptism of Mary Rio. Blenkinsop is a common surname associated with North East England and I assumed a connection between the two men. It is with the help of this reference in the London Gazette on the 25th June 1774, that has enabled me to establish that if not directly between the men, but that Thomas Blenkinsop's father was from Newcastle upon Tyne (d).

He had settled in the Wapping/Shadwell area in the early 1760's.and married Frances Scudamore at the Church of St John the Evangelist, Wapping in 1766 (e).

Thomas Blenkinsop was born in Newcastle in 1749 and lived on the Wapping Wall which I have written about in the first part of my writing about William Young as referred to above. His premises are described in some detail in the context of a burglary on the 13th December 1816, with almost fatal consequences for the perpetrators. From the account of the proceedings at the Old Bailey on the 4th Dec 1816, I have extracted a description of the premises and the valuation given to the items stolen.

Thomas Blenkinsop's accommodation comprised of his shipyard backing onto the Thames, a shop, a cellar with a window and folding-doors which fasten by bolts' leading to the street, a parlour with bedrooms above and accommodation for a servant.

This friend of Elizabeth and William Middleyard was a man of some affluence which could perhaps be an indicator of the social status of the couple. 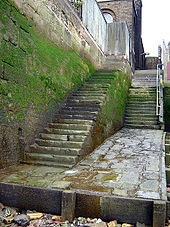 The steps survive today where mariners would disembark from their ships to experience the vibrant community of the Thames riverside (g).

Following his marriage to Elizabeth, William Middleyard as Master of the ship Mary sailed to South America with his wife Elizabeth (Clark) Middleyard on-board. Elizabeth's pregnancy was evidently during this voyage, with their baby daughter being born whilst docked or sailing in the River Rio.

Mary like 'Nancy' was a common name for a ship in the early to middle years of the 19th Century, but the fact that the surname of the Master in this case, that of Middleyard follows the name of the ship has aided my research. This is the first record for William Middleyard as Master of the 'Mary'.

As William Middleyard was a London-based mariner, working for an employer in the Capital, it is interesting to note that neither he nor his vessel is listed in Richard Key's seminal work as indeed neither are generations of the Middleyard Master Mariners.

Subsequent records have enabled me to track in part, William Middleyard's voyages to and from Rio de Janeiro. Following his marriage, he made preparation for his initial voyage, sailing as part of a convoy providing troop-transportation in early February 1808. One of the ships the Meaburn, encountered difficulties almost at the on-set:

The Meaburn Transport, Stonehouse from Deptford bound to Rio de Janeiro put into Dover on the 14th, with loss of masts.
(Star (London)-Thursday 18 February 1808)

I am unable to provide the exact dates of their arrival in Rio de Janeiro or the start of their return journey. They most probably set sail for London soon after the birth of Mary Rio on the 4th December 1808.

Other vessels were Braganza with Captain Hart as Master, Meaburn with Captain Stonehouse (change of Master) and Jean Laure with Captain Penson.
(Lloyd's List - Tuesday 28 March 1809)

The Middleyard family was in Shadwell on-board the 'Mary' at the time of their daughter's baptism on the 3rd May 1809. Two weeks or so later, William Middleyard set sail again for South America, however, there is no evidence that his wife, Elizabeth, accompanied him. She may well have returned to Wapping Street on the South Shields riverside where both her parents and in-laws resided.

The shipping records for this military transportation convoy are as follows:
Deal May 21st Arrived from the River, Mary, Middleyard; and Sally, Hutson, for Rio de Janeiro-wind S.W.
(Star (London) - Monday 22 May 1809 / Public Ledger and Daily Advertiser - Tuesday 23 May 1809)

(The 1st Battalion of the 52nd Regiment, and ten companies of the 95th Riflemen, have marched from Deal for Dover, in order to be embarked)
23rd May 1809 for Rio de Janeiro Mary, Middleyard; New Diligence, Scott; Sally, Hutson;
(Lloyd's List - Friday 26 May 1809)

The involvement with Brazil concluded in 1809 (see Part regarding the Nancy) and the Mary's next recorded voyage with William Middleyard was to Spain.

To date, I have been unable to locate subsequent voyages made by William Middleyard. His movements between the Rivers Tyne and Thames are documented through the baptism records of his two sons.

The second child was a son William born in South Shields and Baptised at St Hilda's Church (i).

Their third child, Thomas was born two years later and like his sister, baptised at St Paul's Church, Shadwell. 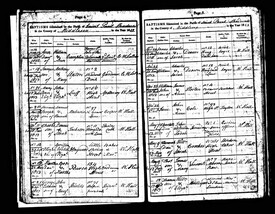