It was during a visit to St Paul's Church, Shadwell accompanied by my husband, Nigel searching for information relating to the Dinning family that I made an exciting discovery and an unexpected connection to another aspect of my research interests. Charles Dinning(1) had lived on a street named 'The Wapping Wall' and he had connections to South Shields during the late 18th century.

The purpose of the visit was to locate the grave of Charles Dinning, a surgeon buried from his address 9 Wapping Wall on the 21st Jan 1806, fifteen years after the burials of two of his five children, William and Mary. One of the gravestones in the picture may have been their grave. I also planned to look for memorial plaques within the church. 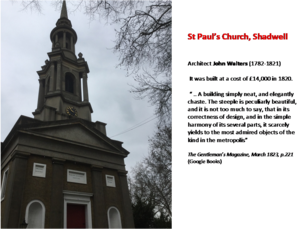 As we entered the Church, there was the noise and bustle of excited children attending a play group serving the new community living close by including the desirable riverside housing and apartments. There was an interregnum, so it was not possible to talk to a vicar. The play group leader was very welcoming and allowed us to photograph the plaques which unfortunately bore no connection to my research.

However, I learned that an active parishioner was Captain James Cook(5), who lived a short distance to the east of the church between 1763 and 1765. A plaque records the approximate site of his house today, on the south side of The Highway. Cook’s eldest son, also called James Cook was baptised in the church in 1763 in the original church as was Jane Rudolph, the mother of Thomas Jefferson in 1718. Another famous name associated with the church is that of John Wesley who preached there on a number of occasions during the 1770s. 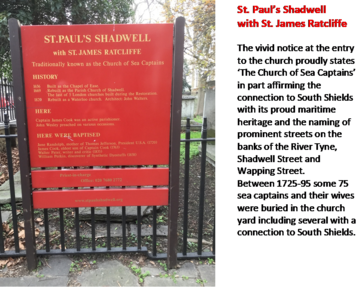 Ratcliffe was once a thriving area of wharfs and bustling streets lined with sailors, houses, shipwrights’, offices and taverns. It then became an area of notoriety and poverty. Much of it now lies buried beneath the roads, railways & tunnel diggings of the riverside.

We wandered through the churchyard where there was 50 or so gravestones, proudly standing and despite the ravages of time and the almost complete obliteration of the inscriptions, I could see some of the lettering on one of them as 'South Shields' and then after further scrutiny 'William Young'; Ship-owner and the date of the 7th June 1832. It is through magnification of the words in the photographs taken that; I can provide a part transcription of the memorial, which was not only to that of one William Young but also of his son, also called William Young who had died the following year, 1833 in Ratcliffe. 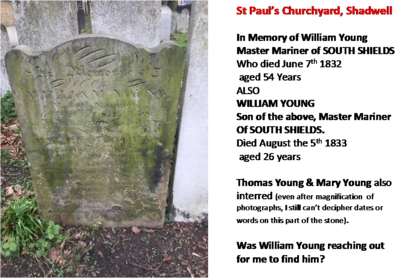 On leaving the churchyard, we walked down towards the riverside; eerily quiet in sharp contrast to the noise of centuries past associated with the heaving wharfs, warehouses and ships being unloaded and loaded. The high-density housing built over generations supporting the workers of the riverside communities of Shadwell, Ratcliffe and Limehouse no longer exists.