1 History of the Nancy

It may well be that William Young owned only one ship, the Nancy of which he was also the Captain. Other than for the entry of Lloyds Register 1835 (1) for ships surveyed 1834/35, there is only one previous listing and that is for 1820, possibly the year when he took ownership of the vessel and as part of the buying process or that after purchase, a survey of the vessel was undertaken. There are three significant facts referenced in the Registers; that the vessel was a Brig, of 260 tons burthen and a 'Prize' of the Admiralty.

Combining the information from these two sources as the basis for my research, whist bearing in mind that during the early to mid-19th Century, 'Nancy' was one of the most popular names for ships, I have endeavoured to establish the history of William Young's vessel prior to his ownership in 1820. I am presenting three (A-C) potentially credible, aspects of my findings; if all prove in due course, to have no association, at the least I am offering some fascinating yarns!

A- The Nancy was originally an American schooner owned by 'Phillips and Gardner' of Charleston, South Carolina. With the emergence of the cotton boom in South Carolina, there was increased demand for enslaved Africans to work on the cotton plantations, so the South Carolina legislature relegalised the trade in 1804 which had been abolished by USA Federal Acts of 1794 and 1800. By 1807, there were 136 ships involved in the trade. The British Parliament's Abolition Act of 1807 made it illegal to import captured Africans into British Territory.

On the 1st June 1807, the Captain, Joshua Viall of Rhode Island, set sail from Charleston on the 'Nancy' to purchase slaves from Senegal (3). On his return voyage there were seventy captives; 35 men, 10 women & 25 children. However, all but three of the crew developed a fever resulting in a loss of control for Captain Viall with at least two insurrections and fearing a third one, he surrendered to two Royal Naval ships off the coast of Spanish Town in the British Virgin Islands on the 1st November 1807.

Since the abolition of the slave trade on the 25th March 1807, this incident was brought before The Court of Vice Admiralty at Tortola. On the 17th December 1807 the 'Nancy' was condemned as a 'Prize' by the High Court of the Admiralty for illegally carrying captured Africans. This incident was of historical significance as the captives became known as the first 'liberated Africans' and resettled in northern states of the USA (4).

B -In 1807, at the start of the Peninsula War, Napoleonic forces had invaded Portugal because of their alliance with Great Britain. The Portuguese Royal family, the Braganza's decided to exile in Brazil. In 1808, they were transported in a flotilla of ships commanded by Admiral Sidney Smith who then became the British commander-in-chief of the Brazil station, providing protection and facilitating trade with South American trade. He arranged the purchase of the British brig Nancy and her subsequent commission as HMS Nancy whilst she was in port in Buenos Aires prior to his recall to Britain in 1809. Her purpose was to run dispatches between Buenos Aires and Rio de Janeiro.

Buenos Aires was the capital of the Viceroyalty of the RÃ­o de la Plata, the Spanish colony (Argentina, Bolivia, Paraguay, Uruguay, and parts of Brazil) which had successfully defeated the British incursion of this territory in 1807 as part of their strategy to defeat Napoleon’s ally of Spain outside of the European field of combat during the Napoleonic Wars as well as enhancing trading opportunities (5).

The Nancy's years of service were not without incident. John Arthur Killwick, a lieutenant from the flagship, Foudroyant, was appointed in January 1809 to command her. By July 1812, Killick was showing signs of a 'mania'; he was declared insane (eventually recovering in England) by Admiral Dixon and Royal Navy doctors who boarded the 'Nancy', ordering that he be restrained in a straight-jacket and relieved of his command. His replacement was Lieutenant William D'Aranda.

Notable exploits of 'HMS Nancy' are as follows: firstly, as one of a detachment of vessels, she was deployed to salvage part of HMS Agamemnon, (Admiral Lord Nelson's favourite ship) which had struck a shoal off Gorritti Island in Uruguay the Summer of 1809. Following this, on the 23rd November 1809, the Nancy was grounded in the estuary of the River Plate whilst transporting 200 Portuguese soldiers to Colonnia, Uruguay for the Viceroy of Brazil. Then, whilst anchoring in Buenos Aires as part of a flotilla during May Week 1810, crew of the Nancy witnessed the revolution to overthrow the Spanish, culminating in the emergence of the independent country of Argentina (6). As part of the naval engagement in the war (1812-1815) between Britain and the United States regarding British restrictions on U.S. trade and the Americans desire to expand their territory; the crew of the Nancy, captured the American 'Brig Nanina', escorting her to Rio de Janeiro on the 22nd August 1813. 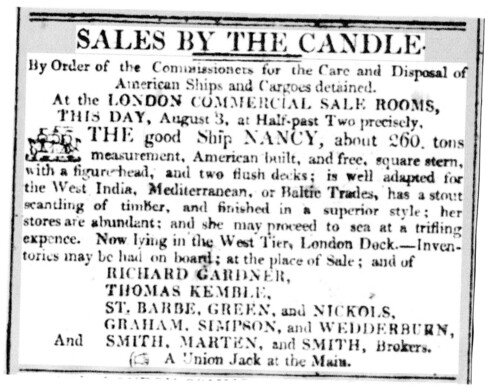 The sale notice for August 3rd, 1814, describes 'The good ship 'NANCY', as follows; '260 tons measurement, American built, and free' - 'her stores are abundant' (perhaps fully stocked when decommissioned)….. 'A Union Jack at the Main' a sign of her association with the Royal Navy. This notice covers three aspects of my research-'Brig', tonnage-'260' tons and American association.

The main inconsistencies throughout, are with regard to the classification of the 'Nancy'; ostensibly that of a Brig yet recorded also as a Snow and even as a Schooner. I have taken advice, but in these uncertain times, I don't have a definitive response.

Their connection with shipping continued throughout the 19th century and into the 20th century. William Young’s Children:- Elizabeth Sarah (Young) Wilson (1826-1883) died in 1883 at the Mariner's Cottages in South Shields. She was pre-deceased by her husband, Thomas Wilson (1822-1852) another Master Mariner who she married in Limerick, Ireland in 1851; he died on board his ship Vesta in 1852 and was buried in Carthagena, Spain.

William Young (1854-1906), son of Henry Hutchinson Young (1823-1884) was the final Master Mariner in the family, carrying on a family tradition of over a hundred years. In 1870 he was an apprentice on the South Shields registered ship Deerfoot, moving to Sunderland in 1875. He passed his examination at South Shields Marine School in 1889, qualifying as Master Mariner after fifteen years at sea having served on twelve vessels. His death occurred in Sunderland in 1906 where he had lived with his wife Emily Elizabeth (Lumsdon) Young (1864-1930).

Recommend this fascinating book which I read just after publication; includes comprehensive coverage of the Slave Trade in Dahomey (now Benin); highlighting coercion of West Africans by their countrymen to travel to ports for transportation